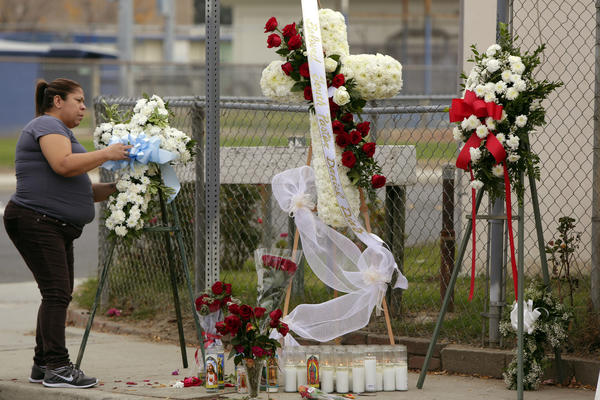 Eddie Reyes was just a 12-year-old in the school lunch line when Daniel Diaz shook his hand, introduced himself and asked Reyes about God.

Twenty years after the pair first met, Diaz was still reaching out to young people. His ability to connect with youths took the longtime friends to the corner of Park and Mayfair avenues in Pomona on Nov. 11, where police say Diaz was shot to death by a lone gunman on foot.

Diaz's killing — just hours after about 200 people gathered for an anti-violence rally at Ganesha High School in Pomona — was the latest in what police and community leaders are calling the worst year of violence in the city's recent history.

"I'm just kind of in disbelief," said Connie Jimenez, whose son Carlos was killed in a still-unsolved homicide in May 2011. "It's a cycle."

Diaz was shot about 12:45 a.m. Monday. He was a passenger in Reyes' car while the pair dropped off three boys who are a part of Diaz's youth ministry at New Beginnings Community Church in Baldwin Park.  The group was celebrating Reyes' 32nd birthday and one of the boys' recent graduation from a youth program. Diaz had turned 33 a week earlier.

The Pomona slaying is the latest homicide to hit the city, which has seen a sharp increase in homicides over the last two years.  Read more here.

Photo: Lynna Moreno places a wreath at a makeshift memorial for a youth pastor Daniel Diaz who was shot and killed at the intersection of Park Avenue and Mayfair Street in Pomona. Credit: Irfan Khan / Los Angeles Times

You seem to have a lot to say about the murders in Pomona. I've noticed you on a couple of posts in the L.A. Times.

Come visit FB page: POMONA, LET'S TAKE OUR HOMETOWN BACK. You don't have to live in Pomona to join us.

We're preparing to honor your "friend" Angel Marquez Bravo. You claim that you cared about him so much, then prove it!!! Instead of coming onto the media web sites and talking why not visit the FB page I just mentioned, and help those who care about Angel Marquez Bravo, shutdown the madness that has taken over Pomona. Otherwise, why are you commenting on the various murders if you're not going to be part of the effort to stop them?

This is about every city in America, not just Pomona. So instead of pouring some out for the homies every time one of you gets murdered, why not be a part of the solution to stop the stupidity of lives lost before they are even lived.

Come check us out: POMONA, LET'S TAKE OUR HOMETOWN BACK.

I wouldn't doubt if these are the same coward(s) that have gunned down the last few victims, their mental illness and heavy drug use makes them extremely unpredictable, I hope the police catch these SPINELESS COWARDS soon.

the cold thing about this is Hispanics killed the pastor.. its been a lot of murders in Pomona.. the 12st have gon haywire this year