Zindy Carolina Gonzalez Escobar worked at a Van Nuys McDonald’s for years. This year, her co-workers noticed a change.

Gonzalez Escobar began wearing long sleeves. She became more reserved. Her friend and co-worker Stephanie Hernandez said Gonzalez Escobar confided to her that she was being abused, but she wanted to stay with her partner for their 8-year-old son, Isaac. 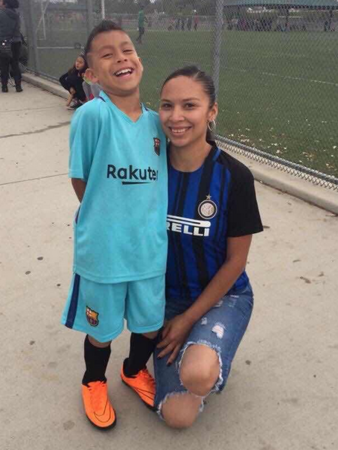 On Thanksgiving Day, Gonzalez Escobar, who also went by the name of Carolina Medina, was found dead in the apartment she shared with her boyfriend in Reseda.

Police said the man confessed to killing his girlfriend. Ricardo Sauz, 35, has been charged with one count of murder, according to the Los Angeles County district attorney’s office. Sauz has pleaded not guilty.

Gonzalez Escobar's aunt brought her to the United States from their home country of El Salvador as a child, her cousin told The Times. Her family wanted her to have a different type of future.

“A future that our country doesn’t offer,” the cousin, Jaime Martinez, said.

Gonzalez Escobar told Hernandez that her on-and-off boyfriend of many years hit her when he saw her interact with other men.

Gonzalez Escobar self-documented her abuse, according to friends and family. She shared photographs with friends that showed bruising on her arms, her eye and her ribs, according to the pictures. She asked Hernandez to capture an evening in August on cellphone video when a red-eyed and drunk Sauz was with Gonzalez Escobar.

In the video shown to The Times, Sauz follows Gonzalez Escobar around a living room.

“He should not be here,” Gonzalez Escobar said in the video to Hernandez, who was filming with a phone.

“What is your problem now, baby?” Sauz replies.“Just call 911, please. He should not be here,” Gonzalez Escobar said.

Gonzalez Escobar was killed just three months after the video was made.

The Los Angeles Police department organized a toy and donation drive for Gonzalez Escobar's son, whose birthday was on Christmas Day. An announcement noted his clothing and shoe size, and also that he likes to play soccer.

“She was a good, loving mother and friend. She was always there for her son,” Hernandez said.

Gonzalez Escobar is the only one of her two sisters to leave El Salvador and make a life elsewhere.

On Dec. 20, her body was returned to El Salvador, to be buried in Colón.

Photo: Zindy Gonzalez Escobar poses with her son at a soccer practice. Courtesy of Stephanie Hernandez