Joshua Pipho, a 20-year-old white young man, was stabbed approximately 16 times on a roadway inside a condominium complex at 25216 Steinbeck Ave. in Stevenson Ranch at 1:48 a.m. Saturday, Nov. 24, and died at the scene.

Pipho was among a group of young men who got into a fight with another group in a dispute that "got out of hand," said Sheriff's Lt. Dan Rosenberg. About 10 to 15 people were involved in the melee, which culminated with a suspect pulling out a knife and stabbing Pipho. A second youth was also stabbed -- an 18-year-old who survived but remained hospitalized. The suspects, also white young men, fled.

Do you have information to share about the life of Joshua Pipho? The Homicide Report needs your help. Please fill out this form. 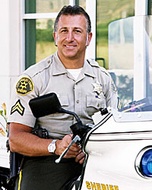 Do you have information to share about the life of Hagop Ohann "Jake" Kuredjian? The Homicide Report needs your help. Please fill out this form.