Witnesses told investigators they heard people yelling at each other around 2:30 a.m. in some storefront business properties that were being rented out as residences, said Los Angeles County Sheriff's Lt. Derrick Alfred.

Alexander and the resident of the space, William Gilbert Sigur, 48, went from arguing to a physical fight inside the building, Alfred said, and then Alexander was stabbed.

Deputies found Alexander lying on the sidewalk, where he was pronounced dead at 2:45 a.m., according to coroner's records. Investigators believe he was stabbed inside the building, "due to the amount of blood evidence found inside the converted residence," and at some point walked outside, where he collapsed. 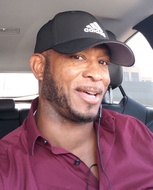 About 7:10 p.m., a security guard at the Baldwin Hills Crenshaw Plaza confronted Johnson, accusing him of shoplifting inside the mall, said LAPD Officer Chris No.

The security guard began talking to Johnson, who then pulled out a handgun and fired at the guard, No said.

The guard was not injured. Johnson fled the mall and Los Angeles police moved into the area and searched the neighborhoods.

Johnson was eventually found in the 3700 block of Santa Rosalia Drive, but he ran and hid inside a home.

Police said Johnson was shot as officers attempted to take him into custody about 8:45 p.m. Johnson was taken to a …

Alice Whiting, a 32-year-old black woman, was shot and killed Monday, Dec. 3, in the 4500 block of West Slauson Avenue in View Park-Windsor Hills, according to Los Angeles County coroner's records.

Ed Winter, spokesman for the coroner's office, said Whiting was in a car about 1:30 a.m. when a vehicle drove up alongside her and the occupant opened fire.

Authorities were called, and the victim was taken to the hospital, where she was pronounced dead at 2:03 a.m. Whiting suffered several gunshot wounds to her body.

Anyone with information about the incident is asked to contact the sheriff's homicide bureau at (323) 890-5500. Tipsters wishing to remain anonymous can call Crime Stoppers at (800) 222-8477.

Whitfield was walking about 10:30 p.m. when a person approached and shot him in the head, said Ed Winter, spokesman for the coroner's office.

The assailant fled the area after the shooting, Winter said.

Authorities were called and the victim was pronounced dead at the scene at 11:54 p.m.

Anyone with information about the killing is asked to contact Crime Stoppers at (800) 222-8477.