6 gunshot wounds, 3 in the back: Autopsy shows how Ryan Twyman died 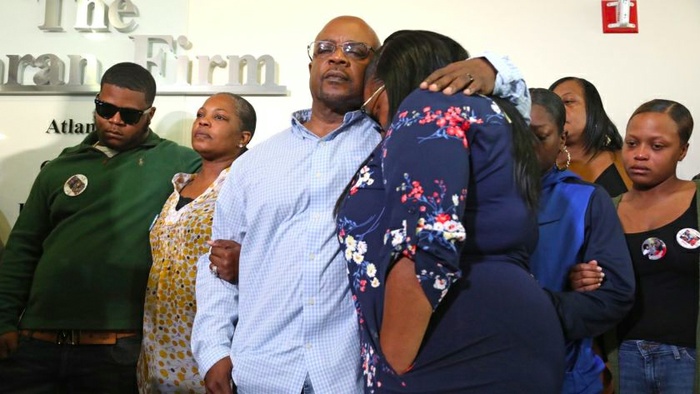 An unarmed man who was shot and killed by sheriff’s deputies at a South Los Angeles apartment complex in early June was struck by six bullets, with three of the rounds entering his back, an autopsy report shows.

The 20-page document, released by the Los Angeles County medical examiner on Thursday, showed that bullets also struck 24-year-old Ryan Twyman in his neck, his right side and his left upper arm. Four bullets were recovered from his body, the report states.

A bullet that struck his upper back and perforated his lung and heart and another that struck his mid-back and entered his spine caused fatal wounds, according to the report.

A video released by the Los Angeles County Sheriff’s Department showed two deputies firing 34 rounds at a white Kia, which they said  Twyman was driving, as the vehicle backed quickly out of a parking space at an apartment complex in Willowbrook on June 6. Twyman died at a hospital. A passenger inside the car was not injured.

Deputies had received information that Twyman, who was under investigation for felony gun possession, drove a white Kia Forte and frequented the apartment complex where the shooting occurred, Cmdr. April Tardy said in the video. In April, gang investigators had found guns at his home, but Twyman was not present, Tardy said.

The Sheriff’s Department said Twyman was previously convicted of carrying a loaded gun and being a felon in possession of a firearm. He was on probation at the time.

Deputies had been trying to arrest him for several weeks when they found his vehicle in the apartment parking lot, near East 132nd and South San Pedro streets, about 7:30 p.m. In the video, one of the deputies walks to the rear passenger-side door, opens it and peers inside with his weapon drawn.

That’s when the driver, identified by police as Twyman, starts the engine and begins backing up, catching the deputy with the open door. The force pushes the deputy into the center of the parking lot, the video shows.

“At that time, both deputies fired their service pistols at Mr. Twyman, to avoid seriously injuring the ... deputy,” Tardy said.

The video shows the other deputy walking to the patrol car, grabbing a rifle and standing behind a parked truck to continue shooting. The car continues to back up in a circular path until it hits a pole supporting one of the carports and stops.

The video has raised questions about whether deputies acted within department policy and whether the use of force was justified. Twyman’s death also sparked outrage from community activists who called for an outside investigation into the shooting.

Attorneys representing Twyman’s family filed a claim for damages against the county in June, saying the men in the car were unarmed and alleging deputies used excessive force. Sheriff’s Department officials have said the vehicle was being used as a weapon but are continuing to investigate what happened.

Under department policy, deputies should not fire at a moving vehicle, or its occupants, unless a person in the automobile is “imminently threatening a department member or another person present with deadly force by means other than the moving vehicle.”

The policy states that the vehicle itself “shall not presumptively constitute a threat that justifies the use of deadly force.”

“There should not have been one single shot fired in any direction in this case,” he said.