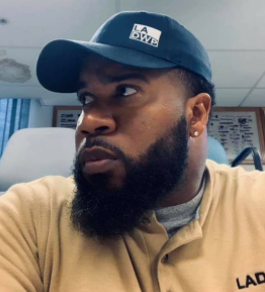 A $50,000 reward is being offered in the killing of a 30-year-old man who was shot while standing in a driveway in the Harbor Gateway neighborhood over the summer.

Akeem “AJ” Coburn was shot July 29 shortly after 10 p.m. by a person who walked up to him. Coburn tried to run and collapsed in the backyard of a home, police said at the time.

Coburn was a hands-on father to two young girls, ages 6 and 10, and worked as a linesman for the Los Angeles Department of Water and Power, according to his family. He was the type to help others. He volunteered with his cousin's youth football league. He'd help his family move boxes if they needed it. Shortly before his death, he volunteered to help his fiancee’s father paint his house.

At family gatherings, he was the first to arrive and was always on time, said his cousin Rosie Bishop.

“He loved his family to the core,” she said.

He once told his mother he wanted to take some classes to be a linesman, so he could take care of her. “He did just that,” said Bernadette Coleman, Coburn’s mother.

“It just breaks my heart to know they took a promising young man from off the street,” she said. “He had his head together.”

When Coburn was 5 years old, much of his family went to federal prison for years for financial crimes.

“Even with that circumstance in his life, he didn’t allow that to make him bitter,” his cousin Joel Bishop said.

And the situation taught him from an early age to stay out of trouble.

“That kind of helped him and made him grounded,” Bishop said.

Amy Bishop, also a cousin, said she wants people to know that Coburn was not involved in gangs or other criminal activity.

“He knew what he wanted in life,” she said.

Who does this to a person? Just sickening that there are people capable of these acts. I am sorry for your loss. RIP young man.

I'm sorry for your loss.

Akeem gave me a birthday I will never ever forget.... He surprised me by visiting me in Chicago for the first time ever.. My baby brother was a stand up guy who has always kept a smile on his face... Had I known that June 15, 2020 , would have been my first and last time seeing him I would have held him longer and closer to my heart.. I just thought we had time. We had so many plans afterwards our meet. Please give us justice!

God knows i need justice for my son. He was a promising young man, he knew what he wanted out of life. Akeem was only 30yrs old he was a old man in a young boy body, he's not one to party, the night life was not for him. He was a hard worker a provider for his girls😭🙏 a hands on father. That monster of a person took away his life senselessly. He was minding his own business. His girl friend woke him up to go pick up her daughter from her cousin home and this is what happen to my baby.God i ask of you to give me justice for my son. This is so painful for me. I cry every single day for my baby my first born. Love you son🌹 We the family not giving up until we get justice. The God that i serve is an awesome God. We the family took this situation up to him in prayers🙏💔😭