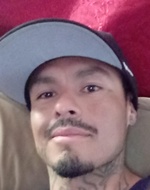 About 8 a.m., a person in the area flagged down a Los Angeles police sergeant regarding a man walking north on South Central Avenue with a knife, according to police.

The sergeant found the man near South Central Avenue and East 28th Street and called for additional officers.

Officers told Flores, who was facing them with a knife, to drop the weapon repeatedly.

One officer yelled, “Don’t come at me,” at Flores several times. Flores ran toward the officer, who began shooting, according to a critical incident video released by the LAPD that showed body camera footage.

Police said there were other officers who were wearing body cameras during the incident, but only one camera captured the shooting.

A 7-inch kitchen knife was found at the scene.

Normally the department releases critical incident videos within 45 days, but released this video early because of “significant community concerns,” a spokesman for the department said in the video.

Amanda Flores, Alex’s sister, said she’s been trying to obtain additional information about her brother’s shooting from police but has been met with silence. She protested outside the police station in the wake of the shooting.

Flores said her brother was “a good distance away” from officers and questioned the need to shoot him multiple times.

“Why did they shoot him so many times and kill him when they could have just shot him in the leg?” she asked.

Three days before the shooting, she noticed her brother was acting strange. Alex lived at his mother’s house, and when his sister came to visit, she said her brother seemed paranoid.

It’s unclear what issues Alex was experiencing, his sister said. Amanda Flores described her brother as a homebody who helped his mother around the house.

Alex was set to start a new job in December with a truck company.

“We want justice, we want answers, we want to know what happened,” she said.

I live close to where the shooting occurred. I recognized him from a few days before the shooting. He was hanging out at a local homeless encampment on 29 just around the corner where he was killed. That encampment is known in the neighborhood for meth and chopping up stolen bikes. Obviously he had drug/ mental health issues, his situation could have been treated differently. I’ve seen the videos first hand and it’s obvious that he was provoking the officers by swinging the knife at them. Tough pill to swallow for the family, god help them be at peace.

He was walking northbound that's for sure. The cops rolled up to the scene and they caught the dudes attention. They opened fire when the dude turned to see who was yelling at him.

i get it he was holding a weapon but does not mean they had to shoot him so many time ! theres other ways to stop him but they took the easy way out and thats not right !! or even so if he had to shoot . he could’ve just shot just once theres was no reason for him to continue shooting so many time ! this needs justice !!

Are you guys serious? Have you not seen the footage released by the lapd? Y’all make everything about racism it’s disgusting the Latin American community shouldn’t stand for this it’s clear and evident from the footage released that Alex Flores ran directly towards the officer holding an armed sidearm with a deadly weapon what do you expect to happen? Twist it however you want mental illness racism whatever doesn’t matter fact is he attacked the police the police shut the situation down sad to say but he’s a previous felon that had the intention of harming an officer. No racism just self defense R.I.P but come on just let it go.

Alex was an amazing young man whom had a huge heart and would give the shirt of his back to anyone whom needed it. It's devastating to hear the news of his passing due to excessive force. Police officers are equipped with a belt full of options but always opt for their guns whenever encountering a minority. A young man's life was cut short and the criminals responsible should be held accountable.

Alex Flores was my cousin. He was shot by the LAPD. Alex flores is an example of what is wrong with the the system. He had just been released from jail. He was having trouble integrating back into society. He was paranoid and always watching his back. That morning his family was looking for him after he left. It wasn’t later that night that they got a visit from the coroner, to let them know their son died in an “officer involved shooting”. After seeing many videos and talking to witnesses the family believes that LAPD did not have to shoot Alex multiple times. They could’ve tased him or shoot him with the bean bags. However, they aimed to kill. Days later LAPD released one body cam footage video. Claiming that only one officer recorded. How is it that only one officer recorded when there were many officers present? LAPD is trying to get away with another murder. Alex didn’t have a history of violence. He was loved by his family and every one who got to know him. His family since the murder have been protesting his death outside of the Newton Police Department.

I am Alex's older sister Amanda Flores. Alex was having mental problems when I last saw him which was on Nov.16, 2019 Saturday. I noticed that he was having symptoms of Schizophrenia. He would close my mom's window curtains and say things like "mom move from the window because they will see you". He would hear things and at the same time hide because he looked and was scared. When I notice that he was not himself,I mentioned it to my mom. We had agreed to get him some help. My brother had and has a family that loves and supports him. He did not deserved to die in the hands of police brutality and racism. He was always a sweet, happy,and funny guy. Everyone around the neighborhood knew him, he was always polite and nice to people. At this point my family and I are looking for answers and evidence. There was no reason for police officers to shoot my brother 5 or more times and more so no reason to shoot him on the head. They could of use a different tactic to stop him. Police are to protect and serve the community not to kill us Latino people. My family and friends decided to protest JUSTICE FOR ALEX FLORES because we want the police officers that kill my brother pay for what they did and STOP POLICE BRUTALITY as well as RACISM.It is very devastating when you are trying to get answers and information and nobody especially the police can't give you any information. We did not get any calls nor information until after 3 days of the incident if it was not because of our protest that started Thursday Nov. 21. We been protesting for JUSTICE at the South Central Newton Police Station from 8:00pm -10:00pm daily. My family and I did not know where my brother's body was until yesterday Friday, November 22, my younger brother was able to locate our brother Alex Flores. Not to say we have not seen his body till this moment because that was denied by the Coroner's decision. We are desperately looking for help if anyone knows where or who we can contact to help us get Justice for my brother please let me know amandafloresf@yahoo.com.
Homicide Report gives us the race of victims and suspects information because either there are so many incidents where Latino victims have died just like my brother in hands of the suspect which is the police and with a high rate percentage homicide in Latino working class and/or to keep track of the percentage homicide of police.
Homicide Report lists killings by police because there is a really high percentage in police homicide,police brutality, and police racism. Which means that the police system is not adequately prepared and trained to confront mentally ill and treat color skin people the same as light skin people.
We are very heart broke and ask for justice for my brother Alex Flores. This time of the Holiday season is very hard to accept that my brother is gone, when everyone else is happy to be with their love ones and are having a wonderful time, my family and I are having the hardest times of our lifes.