A son has a question for the robber who killed his mother: 'Why did you have to go too far?' 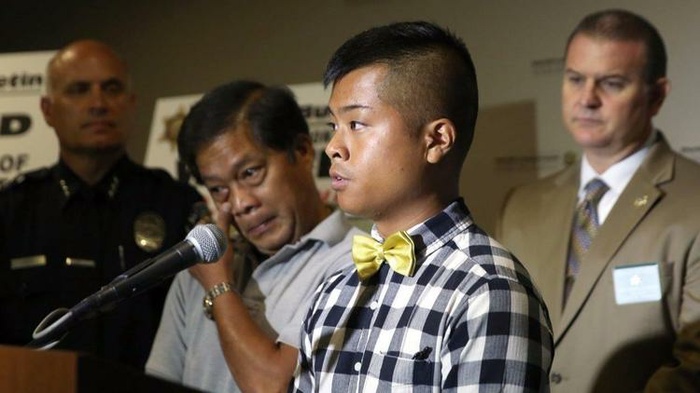 In a room full of cameras, Armando Escandor Jr. took a deep breath and spoke directly to his mother’s killer.

“Why did you have to go too far?” the 21-year-old asked Tuesday, more than a month after an unknown assailant fatally shot his mother during a robbery attempt at an Alhambra hotel. “So far as to take away an amazing woman from this world and from the lives of my family.”

Escandor delivered a heart-wrenching plea for the public’s help as authorities announced a $20,000 reward for information leading to the arrest and prosecution of the gunman.

Xiuxia “Michelle” Chen was fatally shot last month during a robbery attempt at the Ambassador Inn hotel, where she worked for six years.

“My mother did not deserve this, not one bit,” Escandor said. “So being able to know that this man, or the person responsible for this heinous crime was brought to justice, it would definitely take a weight off my heart.”

Investigators on Tuesday released surveillance footage showing a masked attacker holding Chen at gunpoint before the shooting and then fleeing on foot. 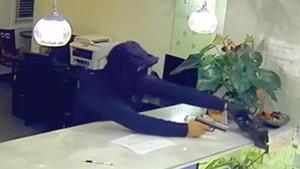 Around 11 p.m. June 2, Chen, a manager at the hotel, was close to wrapping up her shift when the gunman, wearing a black hoodie and a single glove, stormed into the lobby, his face masked by a cap. He pointed a handgun at Chen and demanded she fill a black bag with money.

Within 45 seconds, he fired at least one shot and bolted from the building, his bag empty, police said.

The property owner called police after finding Chen bleeding from a gunshot wound.

Chen, a mother of two, was pronounced dead at the scene at 11:34 p.m., according to coroner’s records.

“This was, in our belief, a random act,” Los Angeles County Sheriff’s Det. Gary Sloan said.

Authorities also are seeking the public’s help identifying a woman, believed to be a hotel guest, caught on surveillance video leaving the hotel lobby seconds before the gunman entered. 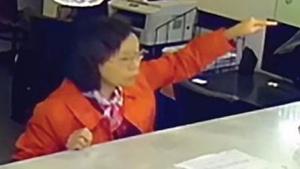 The video shows her stopping and turning around as if she heard something, authorities said.

Sloan said investigators do not think the woman had anything to do with the crime but they would like anyone who might recognize her to contact them.

Anyone with information about the shooting is asked to call homicide detectives at (323) 890-5500.

Photo, above: Armando Escandor Jr. makes an emotional plea for the public's help in finding his mother's killer.

Photo, right: Surveillance footage shows a man reaching over the counter of an Alhambra hotel moments before a fatal shooting.

Photo, right, below: Police are looking to speak with a woman seen leaving the hotel lobby just before the gunman entered.