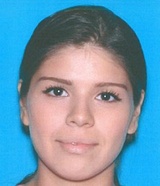 Annette Martinez, a 21-year-old Latina, was stabbed to death Sunday, Aug. 16, in the 1900 block of Batson Avenue in Rowland Heights, according to authorities.

Los Angeles County Sheriff’s Department deputies received a call about an assault about 2 a.m. When they arrived they found Martinez, who had a stab wound, lying in the doorway of an apartment, according to a department news release.

Martinez was visiting the apartment with her boyfriend and their two small children, a common occurrance, said Sgt. Tim Cain.

That night, an argument broke out between Martinez and her boyfriend's sister, Lisette Kimberly Moreno, who lived in the apartment. According to Cain, Moreno stabbed Martinez in the neck and then fled.

While waiting for paramedics, Martinez collapsed. She was taken to St. Jude's Medical Center in Fullerton, where she was pronounced dead at 3:21 a.m., according to Orange County coroner records.

Deputies found Moreno, a 19-year-old Latina, in the apartment complex a short time after the stabbing. She was arrested on suspicion of murder and is being held in lieu of $1 million bail.

Moreno was charged with one count of murder on Aug. 18, accused of stabbing Martinez with a pair of scissors, according to a news release from the Los Angeles County district attorney's office.  She is scheduled to be arraigned Sept. 17 at Los Angeles County Superior Court in Pomona.

Cain said detectives are still investigating what happened before the stabbing. Anyone with information is asked to call the Sheriff’s Department Homicide Bureau at (323) 890-5500. Those wishing to remain anonymous can call Crime Stoppers at (800) 222-8477.

Do you have information to share about the life of Annette Martinez ? The Homicide Report needs your help. Please fill out this form or e-mail us at homicidereport@latimes.com.

I hate it when people solve problems violence specially when they use a weapon and in front of your own children why didn't her boyfriend stop his sister?

Annette was a sweet young woman who didn't deserve what happened to her. She will allways be missed by all who new and loved her " especially her children". May our prayers be with her family and the two children who will never again feel the loving arms of their mother, soo sad....

Have the officers or anyone found the truth of the matter of the cause? Or is it the ignorance of the people and family members who believe what makes them feel better? Justice will be made and to prove you all wrong. The teen whom they blame to be the murderer shall walk free and all of the ignorant people shall look like fools. For God is the only Judge and the righteous one. Ignorant people bath themselves in Holy water knowing they were never there for Annette. . Most hurt them knowing that they left her alone and turned their backs when she needed them most . -You know my name. Im the one who sees and hears it all . I see each and every one of your steps. .

Just wanna say on behalf of the family thank you for your kind words..All we ask for is justice so she may rest in peace

Our hearts and prayers are with you and your family! May god bring justice to this women for carrying out such a horrific murder on a beautiful women who comes from an amazing family and had a heart of gold and was always helping others! This monster needs to be given life in solitary confinement especially when the children were right there in the home!
God Bless Annette's Soul may she rest in eternal peace!

As an outsider it is hard how somebody could kill such a pretty lady.