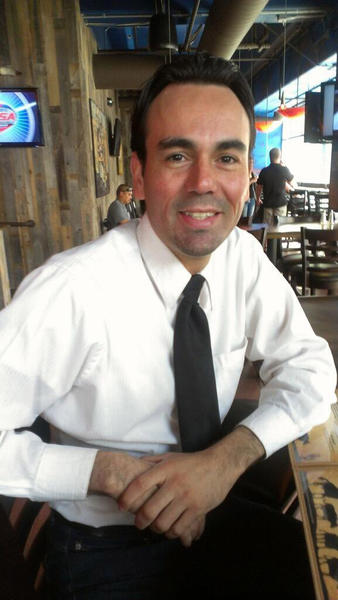 The man was taken to Cedars Sinai in the early morning hours as a John Doe, the victim of a possible assault. He had been discovered between parked vehicles in Hollywood with two black eyes, a bruised face and a laceration on his nose.

A police officer tried to identify him through fingerprinting, but his hands were too swollen. For days, he lay in a hospital bed, unidentified and unconscious.

Wendy Mairena's friend, Ramon Estrada, had been missing for almost a week when she headed out early for the LAPD's Hollywood Community Police Station.

She and a group of friends already had walked nearby streets, passing out fliers, trying to get information on Estrada's whereabouts. The last time anyone had heard from the 36-year-old hotel banquet server was about 1:45 a.m. July 7, when he called his boyfriend of nearly 14 years, Michael Shutt, to say he was coming home.

He never showed up.

"We didn't know if he was dead, alive, if somebody kidnapped him," Mairena said.

At the police station, Mairena and Shutt flashed a flier with Estrada's photo. The officer working the front desk recognized the face. At Cedars Sinai, a hospital worker warned: Estrada's condition was dire.

Family and friends held out hope that he would come out of a medically induced coma. They researched where Estrada could recuperate after he left the hospital.

A month later — on Aug. 4 — Estrada was dead, one of the rare homicide victims in Los Angeles County killed by blunt force.

Those who were close to him are still trying to piece together the 21 minutes between his call to Shutt and the 911 call at 2:06 a.m., directing officers to a beating victim in the 1100 block of North Citrus Avenue, just a block from his home.

The only clue detectives have came from surveillance video that shows three men running from the scene, fleeing to a small SUV, perhaps a Lexus 300 series.

Investigators say they have no way of knowing if the men in the video were involved in the beating or were witnesses running for safety, said LAPD Det. Scott Masterson.

"We really don't know why exactly they picked this victim," Masterson said. "Was it a robbery? Was it a hate crime? Was it somebody out for thrills of beating somebody up?"

The victim could have been just about anybody, he said.

"It's a very scary proposition for the community," Masterson said. "For anybody who lives in that area, for anyone who works in that area."

The loss has been hard on Estrada's family and close friends, who remember him for his love of cooking and entertaining.

Mairena, friends with Estrada since their time at Inglewood High School, had last seen him, alive and well, in May when he came to her home and cooked dinner for a group headed to the Long Beach Gay and Lesbian Parade. After eating, those gathered, including Shutt's parents, watched the parade.

"He was just laughing and having a good ol' time," Mairena said.

Estrada's mother, Blanca Ornelas, 53, took three buses from her home in Inglewood to the hospital each day to see her son, the oldest of four. Estrada was never able to say what happened to him; he never woke up after he was assaulted. In a sad twist for his family, he died on the same day as his grandfather in Mexico.

"I want answers," Ornelas said. "They didn't just destroy my son, they're destroying me."