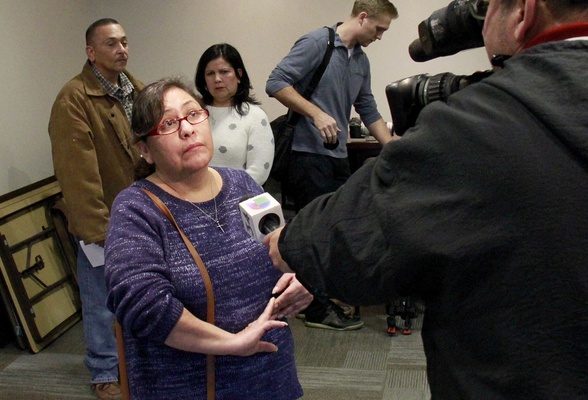 Mary Smay’s tearful pleas didn’t fall on deaf ears in the fall, when she begged people to come forward with information about the killing of her son, Juan Vidal, as he was working at a Jack in the Box in El Monte on Oct. 21.

On Jan. 9, Louie Francisco Herrera, a 20-year-old Latino from San Gabriel, was arrested in Alhambra on suspicion of murder.

"You guys were so helpful to capture this monster who did this to my son," Smay said through tears Thursday at a news conference with investigators.

“It brought people out and gave a new direction to our investigation,” Los Angeles County Sheriff’s Capt. Steve Katz said. 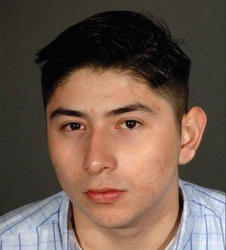 Herrera was charged with murder on Jan. 11 with the special circumstance allegation that the murder involved a gun and was committed during an attempted robbery, said Sarah Ardalani, a spokeswoman for the Los Angeles County district attorney’s office.

His arraignment is scheduled for Feb. 2 at the county Superior Court’s Pomona Courthouse, and he is being held without bail, Ardalani said.

Investigators speculated that the robber who killed Vidal didn’t know how to handle a gun and may have accidentally fired, but that was slim consolation to his family.

“I thought about that, but then why put bullets in your gun?” said Vidal’s cousin, Cathy Rivera, on Thursday. “If he hadn’t put bullets in his gun, then we wouldn’t be where we are today.”

Frankie Rivera, Vidal’s stepfather, said he felt bad for the suspect’s parents. “He’s so young. I’m sure they’re in shock,” he said.

“But I’m comforted he’s off the street. We don’t have to worry anymore that he’s sitting next to us when we go out to eat. It’s sad.... He’s wasted his whole life. But you can’t take back the bad you’ve done.”

Det. Adan Torres said the announcement of the arrest was delayed more than two weeks because officials are still trying to find the driver of a car that sped north on Flair Drive after the shooting.

"I want all of them to be in jail," Smay said. "The driver needs to be caught too." 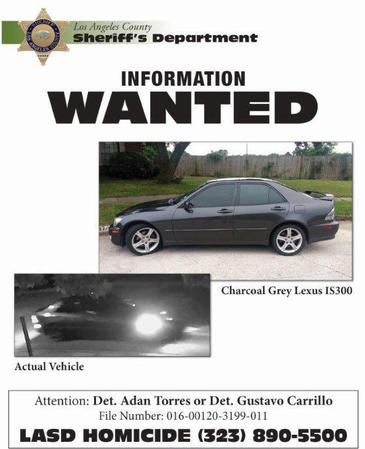 Behind her was a poster showing the car. Photos taken from the restaurant security cameras are blurry, but investigators believe the car was a charcoal gray Lexus IS300 sedan.

A $55,000 reward is still being offered for information, with funds provided by the El Monte City Council, the L.A. County Board of Supervisors and Jack in the Box.

Investigators also credited a Facebook page called El Monte Jack in the Box Killer with helping them develop information about the suspects.

Vidal, 25, worked at Jack in the Box while pursuing his pharmacy tech degree at nearby UEI College. He had just finished his degree, his mother said, and was lining up interviews for his new career before he was killed.

At the time of the shooting, investigators released a short video of the robber, who was wearing khaki shorts, a long-sleeve shirt and a mask with a bushy mustache and large nose. Neither the gun nor the victim can be seen in the eight-second video, but the robber rolls over the counter into the employee area, gestures toward the cash box and then jerks, as though firing a gun. He then rolls back over the counter and flees.

Vidal was struck once in the chest. He died a short time later at a nearby hospital.

Two or three days earlier, a man with a similar mask and matching the assailant's description robbed a Subway sandwich shop in Irwindale, about eight miles away, and took an undisclosed amount of money. No one was injured. Torres said investigators are trying to determine whether Herrera was involved in that robbery.