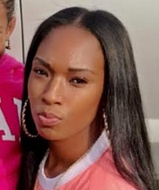 Williams was at a gas station in South Los Angeles shortly after 10:30 p.m. when she got into an argument with the father of her child, Los Angeles Police Det. Dave Garrido said.

While the two were arguing, another woman got out of a car and stabbed Williams, Garrido said.

Williams was taken to a hospital, where she was pronounced dead at 11:20 p.m., according to coroner’s records.

The suspect was identified as Jasmine Jenkins, a 24-year-old black woman, Garrido said.

Jenkins fled to Virginia after the attack, but was extradited back to Los Angeles, police said.

Jenkins has been charged with one count of murder, according to the Los Angeles County district attorney’s office. She is due back in court April 25.

Do you have information to share about the life of Brittneeh Williams ? The Homicide Report needs your help. Please fill out this form or e-mail us at homicidereport@latimes.com.

Rest In Peace BDB.
RIP WOODY. We love you! Taken away too soon. XOXO

Taking one’s life is never OK. Britney lost her life at a very young age in front of her only daughter nobody really knows what happened that night except for those involved.. and it’s unfortunate for the entire family if only we knew what We could have done to prevent this tragedy. Every day I wish I could have known Britney and just gotten closer to her but now that I know that I won’t eve take my family for granted ever again... I’m so sorry for your loss Chrissy, Sade, and Lexus. I love you guys so much and I’ll keep you in my prayers every day and every night I can’t imagine the pain that you feel each day especially knowing this is not your first loss. You are forever family and forever loved. I pray you all find your happiness and be well in this life. There are two beautiful angels waiting for you in the next. May God continue to heal and protect over you and your family.

After nearly a year of going back and forth, a few days ago you got justice. Not to the extent that it should have been but we all know God makes the final call. Her sentencing of 11 years will not bring you back and neither would a sentencing of 25 to life. Truth of the matter is we can go back and forth with this girls family and nothing will get resolved. What’s the saying “fight with your fist and live to see another day”. That’s all I’m going to say about that. Anyways BDB you will never be forgotten. Especially since your homegoing was on my birthday and you left this beautiful lil girl to be a blessing and a piece of you here on earth. You didn’t deserve to go but God had other plans for you. You’re in a much better place now. Love you always and forever, Your Niece Nette

The only question I have is why Britneeh went over this young ladies house? Restraining order violated over being upset over sneakers? 2 sides to every story.. luckily video cameras in apartment complex, gas station and eyewitnesses in the apartment complex will shed a better light.. Sonetimes people get tired of getting assaulted.. it was jealousy on Britneehs part that got her killed. Family must face that reality. Jasmine was not looking for a fight or trouble... Britneeh was. The only three things that are regrettable is Britneeh taking her daughter with her to witness this violence and death... last but not least Jasmine fleeing.. I can see the fear she had.. I just wish she would have stayed at the scene. Bullying is not the way because that person one day will get tired of it. I know the loss of a child especially in this manner is difficult and it's hard to accept the truth of what really went down but the truth will set you free.

It's very tiring and sleepless nights. When all the lights are off n I say my PRAYERS🙏 and picture my BDB my baby daughter BRITTNEEH LeSTARR WILLIAMS is dead. I will never hear her SOFT baby voice. Her FACE,PICTURES ,MEMORIES running like a TRAIN across my head. LIFE goes on for others. I CRY A LOT and have to WAIT and be PATIENT about TWO SELFLESS KIDS wasting their lives in jail behind ANGER JEALOUSY LIES MANUPILATION 👏A SIN IS A SIN

It's very tiring and sleepless nights. When all the lights are off n I say my PRAYERS🙏 and picture of my BDB my baby daughter BRITTNEEH LeSTARR WILLIAMS is dead. Still in DENIAL. I will never hear her SOFT baby voice. Her FACE,PICTURES ,MEMORIES are running like a TRAIN across my head. LIFE goes on for others. I CRY A LOT and have to WAIT and be PATIENT about TWO SELFLESS KIDS wasting their lives in jail behind MURDER DOMESTIC VIOLENCE STABBING ANGER JEALOUSY LIES MANUPILATION ABANDONING THEIR CHILDREN 👏A SIN IS A SIN U REAP WHAT YOU SOW

not a day that goes by that i dont think of you, imyour life since day one you've been a1 hate to say goodbye. i pray i'll see you again no matter where you are! Till i see you again i LOVE YOU BDB forever -TinyBall

Auntie I Love you so much and hate that you went through this tragedy it's a really sad and very tough situation and we will get Justice FOR YOU LOVE YOU AUNTIE.... FOREVER YOU WILL BE MISSED BRITTNEY.....

When I was told of this young mother/lady untimely death it just truly pierced my heart I just can't believe that a person could be that angry to take a life instead of thinking about all that's involved.This is unnecssary anger and hostility towards this lady is just unbelievable. I feel so grieved for both families and the children involved. I didn't know her personally but my daughter is the same age they attended school together and I can only imagine what both of these grandmothers are going through God Bless these families and I just hope the next young women whom find themselves in a similar situation think about your actions and stop!! and learn to control yourselves you all have a Full life To Live! Wake Up Everybody! Senseless