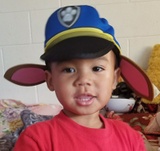 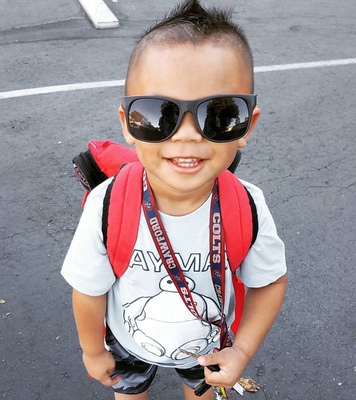 Franklin Pon-Ros, a 3-year-old boy of Cambodian-Laotian descent, died on Saturday, Jan. 20, after he was shot in the 2800 block of West Alondra Boulevard in Compton, according to Los Angeles County coroner’s records.

Franklin was in the back seat of a car when his mother and her boyfriend stopped in the parking lot of Nate’s Liquor Mart at West Alondra Boulevard and South McKinley Avenue about 7:40 p.m., said Los Angeles County Sheriff’s Lt. Joe Mendoza.

The boyfriend walked into the store briefly, passing another man standing at the counter, according to surveillance video made public on KTLA5 and other networks this week. The men saw each other but did not speak in the store, Mendoza said.

The man at the counter left and walked to his car, which was parked near the door. The boyfriend left the store a few minutes later, and as he walked by the other man’s car, the two apparently had a brief verbal exchange, Mendoza said, “and that’s when the shooting begins.”

Investigators say both men exchanged gunfire. The surveillance video shows the boyfriend standing behind a white sedan and raising his arm to shoot. The other man, who was sitting behind the wheel of his car with the door open, twisted around in his seat to fire back toward the sedan, where Franklin sat in the back seat.

The boyfriend got into the front passenger seat of the white sedan, which sped away on Alondra Boulevard seconds later, according to the video.

“As they drove away, they noticed the child had been shot,” Mendoza said. “They immediately called 911 and came to a stop in a parking lot in the 17200 block of South Central Avenue in Carson, a little over a mile away, to wait for law enforcement. Compton Station deputies responded and took the child to the hospital themselves in an attempt to save his life.”

Franklin was pronounced dead at the hospital at 8:02 p.m., according to coroner records.

His paternal aunt, Sovannary Ros, said her family found out about the shooting through the media, and has been reeling ever since. An online fundraiser has been established to help the family with expenses.

“Franklin was such a happy person,” Ros said in an interview on Jan. 23. “He loved his family, he loved playing with his cousins. He’d loved giving hugs and he’d say ‘Hi’ to anybody. He was just a loving kid.”

The night Franklin died, investigators questioned the boyfriend, who has not been publicly identified. The boyfriend was cooperative, Mendoza said, and not arrested.

In the meantime, “based on physical evidence, witness statements and the video, investigators were able to identify the other male who was involved in shooting the child,” he said.

Investigators contacted the man’s family and his attorney, Mendoza said, and arranged for his surrender on Monday, Jan. 22, at the East Los Angeles sheriff’s station.

The man, Dwayne Christopher Ward, 29, is being held in jail for violating the terms of his parole, Mendoza said. No other charges have been filed at this point, he said.

“We’re trying to get all the information and be as thorough as possible so the district attorney can evaluate the incident and determine the criminal culpability of the parties involved,” Mendoza said.

Community members led by activist Najee Ali held a vigil for Franklin on the weekend, calling for Ward to turn himself in, but after the surveillance video surfaced, Ali and others held another news conference on Tuesday, saying the boyfriend needed to be held accountable.

In a separate interview, both Ali and LaWanda Hawkins said the boyfriend should have known better than to pull a gun when a toddler was in his car.

“We feel it’s a public safety issue as long as he’s on the street,” said Hawkins,  who started Justice for Murdered Children after her 19-year-old son, Reggie, was killed in San Pedro in 1995. “We’re scared more blood is going be spilled while he’s on the street. Everyone involved with that shooting needs to be arrested.”

Franklin’s father, Richard Ros of San Diego, echoed those sentiments on Wednesday, Jan. 24, when he came to Los Angeles to work out burial arrangements and ”seek justice for my son,” he said.

He called on investigators to arrest the boyfriend. “They should be putting him behind bars because he’s the one who provoked the shooting,” Ros said. "I lost the love of my life. He’s gone now, and no one can give him back to me.”

Mendoza said there are currently no plans to arrest the boyfriend, and he wouldn’t confirm who fired the first shots.

“If you can clearly see what happened in the video, that’s fine, but we’re trying to protect the investigation from being tainted,” Mendoza said.

“The bottom line is that both of them shouldn’t have had guns, but right now, we’re just trying to get to the truth as best as possible. The boyfriend is not wanted at this point. It’s up to the DA to decide who will be charged.”

Do you have information to share about the life of Franklin Senkarana Pon-Ros ? The Homicide Report needs your help. Please fill out this form or e-mail us at homicidereport@latimes.com.

I had a pleasant time with Franklin when he and his mother came to visit at my aunts home. I spent four days getting know him. And find out 2 weeks later he's dead. For nothing! Everyone involved should go to prison for a very long time.

We just buried him today , the mom wasn’t even there and they both fled California while justice isn’t served. How can my nephew Rest In Peace while the ones who initiated are free in society. This world doesn’t make any sense and All of his family will be grieving for years to come wondering why they are free. There was a big time lapse from the scene and when they reach authorities , they got rid of the evidence and gun and didn’t even bring franklin straight to the hospital how is this right? :(

Both need to be arrested for manslaughter .recklessly participating in attempted murder by both of them trying to kill each other with a child nearby . Also endangering a child's life . They both exchanged threats in front of store.

Compton is a charter city. I was reading on an activist page who is helping the family that D.A. Lacey D and the sherrif department won't make an arrest. How could she when Compton is a charter city with their own way of doing things within the city. Their is so many killings in Compton especially in that area. Serious consistent pressure needs to be put on the mayor and city council. Compton is of its own society and rules. I'm not feeling secure for this family in knowing that this family do not have the right representation for justice when dealing with Compton.

The lives that are lost, the numerous other lives that are shattered and the communities that shutter in fear because of gang violence. It should be referred to as street terrorism. It is a lifestyle that only breeds death, fear and destruction. The participants don't grasp the idea that there are NO winners in that lifestyle. Gang members will either be incarcerated or be killed and the only ones that mourn their death or their lengthy prison sentences are their families, NOT their "HOMIES". They pay allegiance to criminal organizations that destroy their lives, the lives of their families and terrorize communities. There is nothing to gain. Gang members are sucking the life out of communities not giving back to them or protecting them. These young people should be working, learning a trade and going to school. They should be teaching their younger siblings and children to be good, productive people instead of committing heinous crimes to benefit their gangs. Instead people are killed. Innocent people...

Such a tragic loss of life. He had so much life ahead of him. I'm praying that his family gets the justice that they deserve. Continue to rest in eternal heavenly peace, little man.