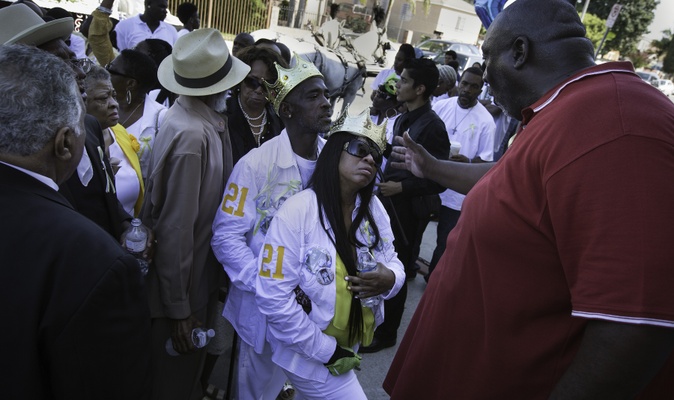 Flowers from the funeral wilted on the kitchen table as a mother and father spoke of their son in the past tense.

Elijah Galbreath, 16, was a fast and fearless football player who was gearing up for his first game at Augustus F. Hawkins High School. His last text to his father was a reminder that he needed cleats.

On Sunday, Sept. 27, his mother asked him to clean his room. He did, then left his home in Watts.

Timeca Person-Galbreath can’t stop thinking about hearing the gate closing, then about 15 minutes later, neighbors summoning her outside.

“They shot your baby,” they said.

Elijah had been walking down East 103rd Street toward his home when a car pulled up and a person got out and shot him. His body lay in front of a church until paramedics came.

Elijah was pronounced dead exactly three hours after a 39-year-old man died after being shot in a neighboring housing development. In Elijah’s death, three men have pleaded not guilty. The defendants, none of them older than 21, are all alleged gang members from the Watts area. Police are still investigating whether the two shootings are connected.

Los Angeles is seeing an increase in homicides this year, but Watts has remained an exception. The two killings brought back a violent deja vu of police on every corner and mothers afraid to go outside.

Elijah’s father, Moran Galbreath, said that his son’s killing is a reminder of how quickly things can escalate in the housing projects in Watts. About a block from his home is Jordan Downs, home of the Grape Street Crips. Another project, Nickerson Gardens, is home to the Bounty Hunter Bloods, and historically the two gangs are rivals.

“The smallest little thing can set them off,” said Galbreath, who said his son wasn’t involved in gangs.

Andre “Lowdown” Christian, who grew up in Watts and facilitates a group that works with fathers in Jordan Downs, said that Elijah’s death had shaken the community, especially because he was a promising teenager, one whose dream was to become an NFL player.

But, he said, it’s inspiring people to try to make a change in their community.

“It’s making people want to do something different,” he said.

Marco Navarrete was one of Elijah’s coaches during his two years at South East High School, before he transferred to his new school. He said that Elijah — also known as “Lightning” because of how fast he could run — was special.

“He was one of those kids, he had a significant amount of talent,” he said.

After the shooting, he said, several students asked him to wait until they get through their front gates before he drives off.

“It’s sad that you can’t even walk around your neighborhood at times,” he said.

The threat of violence was why Elijah’s mother, Timeca, had her boys play sports. When she heard gunshots in the area, she would call Elijah or his brother to make sure they were OK.

Timeca wanted Elijah to be on the streets he had grown up on one last time. On the day he was buried, a horse-drawn carriage pulled Elijah’s casket from his home to the shooting scene, then to Beulah Baptist Church.

Mourners filled the pews, crowded the perimeter of the church and lined up outside to say goodbye to “King Yella,” a nickname his friends and family had given him.

His current and former teammates walked to the casket. The composure that some had held so tightly for the service collapsed; as they walked away, tears ran down their faces.

After seeing the casket, a bulky young man wearing a white jersey with the number 3 sat in the front row, sobbing.

Others walked by and gave him a gentle pat on the head, a gesture of comfort for a teenager who just wanted his friend back.

This really hurts my heart to see the parents crying & mourning for their child. We all have to take responsibility especially us black men, we have created our own genocide with this gang life! Nobody is winning when it comes to crime, education is the key for our children. We must start writing our elected officials for harsh punishment for these since less murders! We mention black leaders we can all be leaders by taking a stand and stop looking the other way.

My sincere condolences to this family. Our society is in desperate need of relief from gang shootings. I am so sorry to hear of this senseless death.

Another one of hundreds of stupid killings. Please people beg for stop and frisk. You could be the next one gunned down for no reason. I am begging you!

To Netwait, You are so right, NOTHING EVER CHANGE. May God give this family Strength.

Why did they have to take my cousin so early he was only a young football athlete doing things with his life ,staying out of the streets ..😭😭😰

Praying for the comfort of the family and community affected by this tragic loss of a such wonderful person. God bless you all.

Deepest Condolences goes out to this you man family and friends. Netwait, no one really have an answer to the problem.in my opinion most of these people that are killing need to be loved conditional and unconditional. They need to know that can channel that negative injury into something positive. It is sad that our black leaders are not doing enough to combat the violence. it is a shame that it has gotten to the point no one can drive their cars with out being gunned down, can't be in their home without being harmed by a stray bullet. Children today have very few options walking around in your own community can be stressful.

***Andre “Lowdown” Christian, who grew up in Watts and facilitates a group that works with fathers in Jordan Downs, said that Elijah’s death had shaken the community, especially because he was a promising teenager, one whose dream was to become an NFL player.

But, he said, it’s inspiring people to try to make a change in their community.***

You know what? Talk is cheap. I don't doubt these folks are well-meaning, but after every one of these kinds of shootings the community becomes "inspired to make a change." They hold a few meetings in a local church. And then ... absolutely nothing of substance changes.