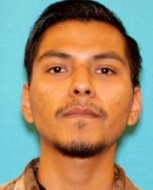 Christian Nino, a 22-year-old Latino, was fatally stabbed Sunday, Jan. 1, in the 2600 block of Jeffries Avenue in Cypress Park, according to Los Angeles County coroner's records.

About 2:15 a.m., officers from the Los Angeles Police Department responded to a call of a stabbing, according to an LAPD news release.

When officers arrived, they encountered paramedics who were treating Nino, who was pronounced dead at the scene.

Police believe Nino got into a fight with three other Latinos and was stabbed, according to the news release. The others, described as being 18 to 20 years old, were last seen running northbound on Jeffries Avenue to West Avenue 28.

Share a memory or thought about Christian Daniel Nino