Compton activist offers her own money to find nephew's killer 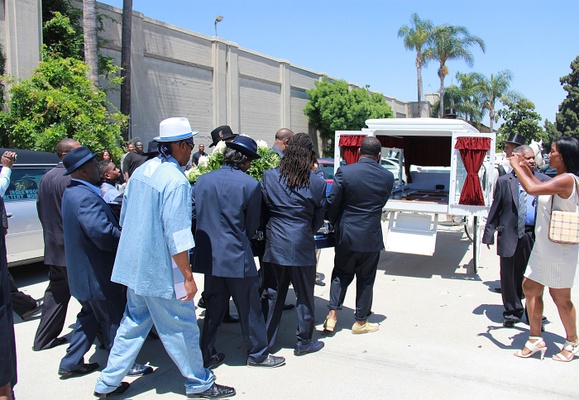 When Kevin Norwood was shot to death at the Compton Flea Market in 1989, he was just 18. “I lost my mind,” says his mother, Rita Norwood Belfry, pounding on doors around her Compton neighborhood, trying to flush out her son’s killer.

Then Belfry’s 18-year-old nephew Deon, whom she raised as a son, was killed in a drive-by shooting the following year. “We had to replace my son’s headstone with a double headstone for him and my nephew.”

Belfry, a community activist best known as Ms. Ritta, has known many other shooting victims in the 40 years she’s lived in Compton, but the final straw came July 12, when Darrell “Shadow” Hines, another nephew she raised from age 8, was shot and killed at Caress Avenue and Marcelle Street, just a few blocks from her home.

Hines, 38, had just left a vigil for Travione Mason, a 27-year-old man who grew up in the same neighborhood and was killed July 11 while he was catering a party in Westmont.

Her nephew went to the vigil out of respect, Belfry said, to light a candle for his former neighbor, who had one child and another on the way. And as Hines sat in his car preparing to drive away, someone walked up to the front passenger door and shot him dead.

“This is where it stops,” Belfry said.

She went on: “I want justice. I want his killer in court before the streets get him. To be murdered is too easy. I want to get him in court, so these people see what happens when you do things like this. I want him in court and then locked away for the rest of his life.”

Belfry is willing to put her own money behind making it happen. She’s holding a news conference at 11 a.m. Thursday at the site where Hines was killed because she wants to speak directly to the neighborhood. There were many people at the vigil that night, she said, and neighbors who probably knew Hines as a boy.

“I want witnesses. That’s all we need are witnesses,” she said. “I know they are homeowners around there, and can’t afford to move, and I know they’re afraid for their lives, but somebody has to talk. If people talk, and come out of their little shell, we can finally get some justice.”

Belfry borrowed money to remodel her home earlier this year, and Hines, well known for his skills in mechanics and carpentry, had started some work before he died. Now, Belfry says, she intends to take the money she was going to use on her home and offer it as a reward.

No one was ever arrested in the killing of her other nephew Deon. And although investigators believe more than one person was involved in the gunfire that killed her son, only one young man was charged, but that man spent just a year in jail, in part because no witnesses came forward, she said. 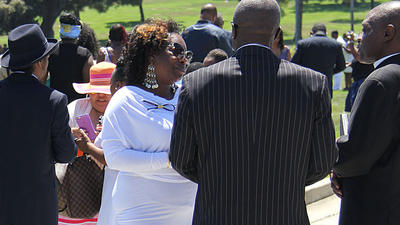 Nearly 400 people turned out for Hines’ funeral at Inglewood Memorial Park on July 25. The service lasted nearly three hours. Mourners remembered Hines as a warm-hearted and peaceful man who loved fishing, barbecuing and helping people as he could.

Hines had his time in a gang when he was young, Belfry said. He went to jail “for being stupid,” she said, and when he got out, he turned his life around, doing carpentry work with his motto, “Darrell Does It,” and opening a body shop called Luxury Custom with a longtime friend.

People spilled out of Belfry's home after the funeral, remembering how Hines tried to make people happy, and how he had started working with kids in the neighborhood, taking them fishing and trying to show them alternatives to gang life.

"What we have to do is reprogram our children's minds," Belfry said. "I don't own a gun or even touch a gun, but these people are shooting guns like it's a shooting range, and they don't care who they hit."

Photos: (Top) Darrell Hines' casket is moved into a hearse at Inglewood Memorial Park. (Bottom) Rita Norwood Belfry with other mourners at Hines' funeral. Credit: Jeanette Marantos / For The Times

Wow!! just read the article once again could not bear the pain .found out if you kill in Compton you can get away with. Yeah I said it it's real homicide investigators throw files of gang members and others under the carpet and 1989 white folks really really cared now if we see bodies on the ground we walk over them if they don't belong to us like insects I've woken up I understand the hurt but I don't understand how no one cares we have to learn how to love again with feelings and sincerity God bless you

Momma Rita, I am just seeing this! I am so very sorry for your losses!! I truly Love your entire family.

Man you will never know how much I Loved Kevin, Deon and Darrel. I know I've been outta the loop but we went way back!! I truly miss them all.

I am Praying for you all. This madness has to cease. I Thank God for your activism. You are SO STRONG MOMMA!!

I have known Rita for over 25 years. A true activist that started with Drive By Agony in 1992. Much love to her and her continued support and courage to help in the movement to help Stop The Violence since 1990

Be in Peace Shadow ya boi Inglewood Twin....

This was a good man,cousin I'm sorry you had to be called home before your time. On long beach blvd and marcell. My brother Marcellino Partway was killed by some hood called" snot said " . Our whole family wants justice for our lost love ones. Even the police killing people.

My friend and brother life was took selfishly from us who truly loved him and respected him.he will never be for gotten.those responsible for this will be brought to justice.The streets is a lie but don't lie at the sometime.rest my brother well.I love u LOC..popcorn.

In the passing of Darral "Shadow" Hines, I, like numerous other individuals was devastated beyond disbelief when I received the news of his death by his cousin. Darral was like an older brother figure to me, he immediately welcomed myself, family and friends into his life as if he had known us for decades. We will truly miss his humorous, vibrant and loving personality. May God be with the family and each and every individual who is affected by the loss of my "Big Bro" Darral Hines AKA Shadow. I love you Mama Rita! RIP Big Bro #LongLiveShadow #ForeverInOurHearts

reading between the lines of your post it would seem that you are suggesting that when a black man kills another black man it is a white man's fault...

but then it's always someone else's fault right ???

the problem is it's a lot easier to blame others and cling to conspiracy theories than for the community to take any sort of responsibility for how it is raising its children...

@ Sean, I grew up in Compton, left, went to college, moved to Bellflower and returned to Compton; not.to buy one piece but two pieces of property in Compton. The city is as it is because people refuse to get involved in changing it. This city WILL be a city that God is proud to call HIS own. There is tragedy in every area, but we have to continue to Pray and educate our citizens about the plan that the "outsiders" have for us to kill each other off, so that they can move back and reclaim the beautiful city.of COMPTON

It's sad I feel like the Cuty of Conpton or the Sheriff Department don't care and if you don't have money you are even more screwed up. My son was killed in the City of Compton, May 13, 2001 and he was on 18yrs old and we also paved the street, going door to door and after 14 years I have not heard anything, just another lost case, another unsolved murder to add to the list. Rip Jeffrey D Young 4-18-83 - 5-13-2001

God can change anything and will reveal the person who killed my little cousin. He is an Angel watching over us now. No matter where you live, tragedy can come to your neighborhood.

You were a good man Shadow. I never got that CD from you.....
Much love and respect to you young brother.

Shadow Rest In Peace you will be truly missed, I look at your passing as you being on an extended fishing expedition waiting for the rest of us to get there....

I live in Compton and I love my city. Our city gets a bad rap because of a few individuals. It's very sad that people don't care about other people and where they live. The end is near, get it together people

SHADOW!! You are loved and missed...still in disbelief.

THA SHADOW R.I.P .....Coctail Monday Crew from the garage u will be missed

When will people understand that these neighborhoods will never change. I work throughout all of South LA, Compton included, and cannot describe to you the things I see each and every day. Its an absolute dump. Save up money and get out.