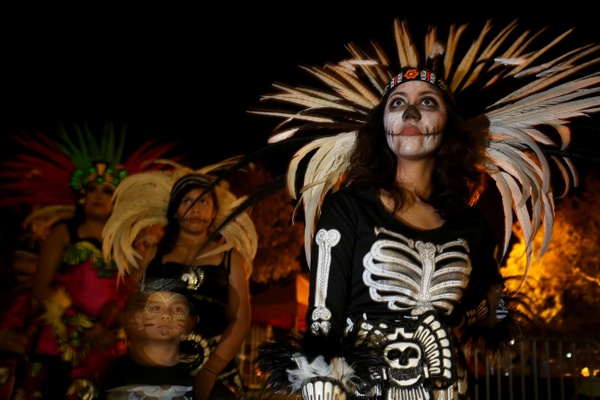 Luz Ruiz was skeptical the first time the lights flickered in her house. It was a few days after her son, Roberto Ruiz, was shot to death in 2005. Then the volume on the television started changing at random.

“In the beginning, I thought I was going crazy. It’s too much for our brains to process,” said Ruiz, 61. “And then I started to smell his cologne. I knew that it had to be a sign.”

The experiences led Ruiz to seek other victims’ mothers. As she connected with them, she learned that some had also experienced spiritual events after the deaths of loved ones. And she took comfort that she was not alone.

So on Friday, Ruiz and others built a Day of the Dead altar in San Pedro at an annual gathering hosted by Justice for Murdered Children.

In front of the altar decorated with portraits of homicide victims, Claudia Romero, dressed in a feathered mask, raised a goblet and muttered a prayer inviting spirits of homicide victims to visit their loved ones. Families watched as she wafted incense before each image and a ring of dancers moved to the sounds of drums and shells.

Romero stopped at the final portrait: a young man wearing a gray fedora. She looked into his eyes and touched the photograph. It was her son, Ernesto Villagomez, who was killed in 2011 in East Hollywood.

Romero was generous with the incense, then stole a moment to kiss Ernesto’s picture.

“I believe he’s always watching me, and I feel his spirit when I need him,” Romero, 48, said later. “If I didn’t, I couldn’t have made it this far. His presence is my medicine.”

Though most Day of the Dead celebrations were over by Friday, Romero hoped the ritual would help grieving families.

“Not everybody will understand except those who’ve been through the pain of knowing someone who was killed,” Romero said. “Some people say, ‘She’s crazy,’ but only I know what I’ve seen.” 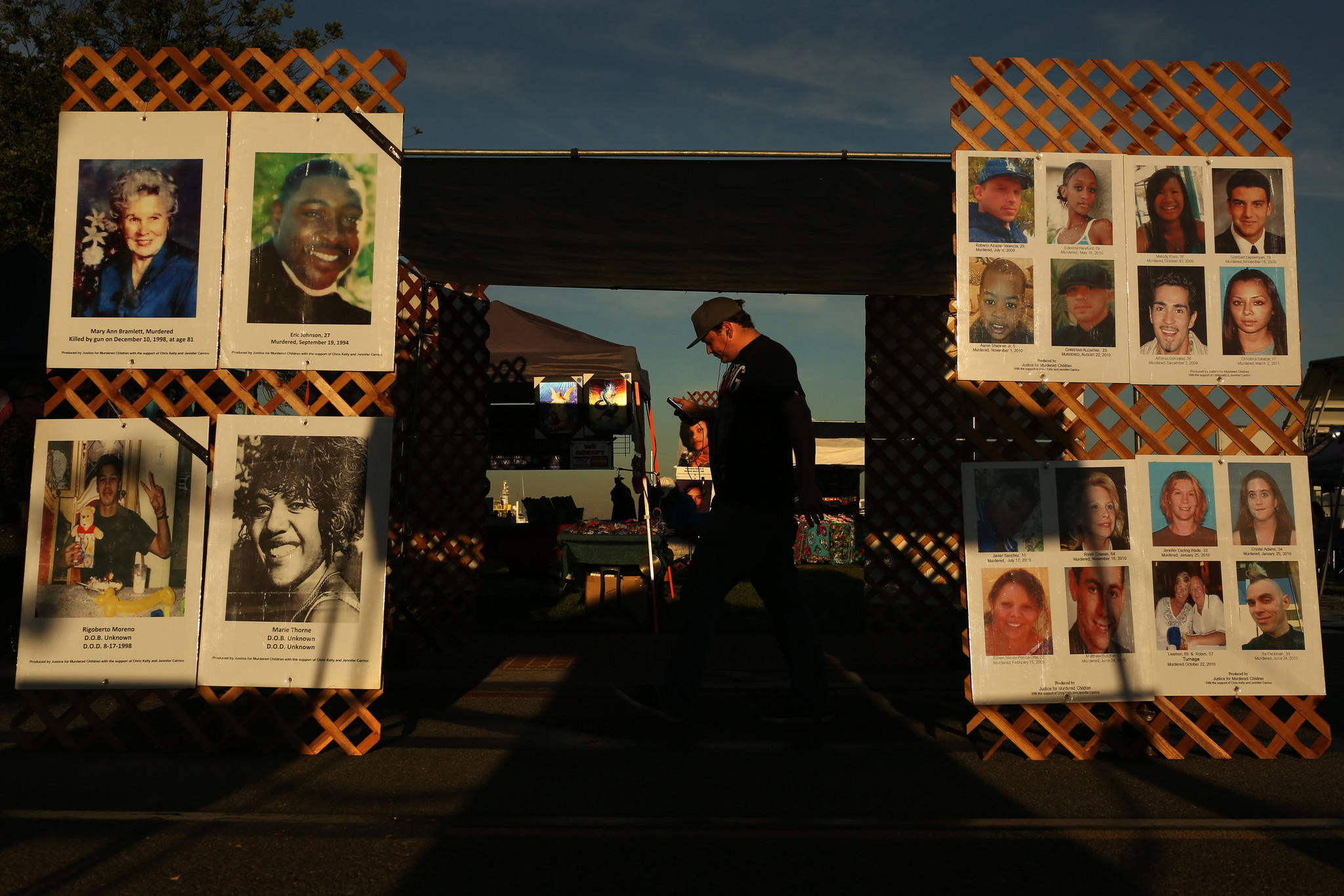 As Romero blessed the altar, Lidia Rodriguez sat in a lawn chair, watching and wringing her hands. Her son’s photo sat on the altar next to a bottle of tequila. More than a year after Salome Rodriguez was shot by a former LAPD officer, she says she is still waiting to connect with his spirit.

“I feel really sad because I’m his mother. We were really close, but I’m not sure how I would handle it, to be honest. It would be overwhelming,” Rodriguez said.

The day after her son died, she built an altar for him at home. Several days later, her 8-year-old son was talking to his late brother in his sleep. Then other friends and family would dream about her son or have other spiritual experiences.

“Honestly, it makes me jealous,” Rodriguez said. “But I know he’s near and watching. He speaks to me through other people, but it’s nothing like hearing him again, feeling his presence.”

When Romero finished the blessing, a boy in a blue hoodie joined the circle of dancers while his mother, Jennone Lakiesha Marshall, smiled in the crowd. Her son, Justin Logie, was killed in 2015 in Florence.

She also said she was visited by her son. While driving, she saw his face in the sky.

“It was weird, I admit, but you don’t get to choose what you see. He wanted to contact me,” she said. “And I’m not gonna fight that. It was a precious moment.”

I know these people are not crazy and they are absolutely right when they say that a person who has never had someone they loved murdered will not understand. Others will say that the grief is causing hallucinations, but a hallucination doesn't walk up and down the hallways opening doors or turn the radio on to a favorite song you shared. These are things that many of my family members experienced after my cousin was murdered, myself included. My aunt said that the week before my cousin was murdered, he kept having dreams about being murdered and was fearful for his life. She also said that before she received the call of his death, she knew he was gone;she could feel it.