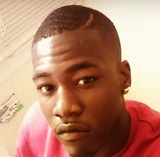 Justin Kieshaun Alexander Logie, a 19-year-old black man, was shot and killed Friday, March 20, in the 100 block of East Florence Avenue in Florence, according to Los Angeles County coroner's records.

Police said that Logie was standing in front of a home about 2 a.m. when a person walked up and opened fire, according to a news release from the Los Angeles Police Department.

Logie was pronounced dead at 2:12 a.m. at the scene, said Ed Winter, assistant chief of investigations for the coroner's office.

Police believe the shooting was the result of a dispute.

Share a memory or thought about Justin Keishaun Alexander Logie

I pass the memorial site on my way to work, such a sad thing to happen to a young man in his prime.....when will all this foolishness end, may God bring some kind of comfort to this family.

Dang Rest in Peace Justin YOU will forever be missed and apart of everyones life , Watch over your family and your brothers loni and shonti will miss you dearly , Watch over your mom as well keep her strong and her spirit lifted always.