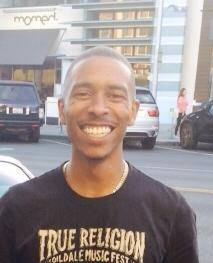 Dominique Lee Austin, a 25-year-old black man, was shot and killed Monday, March 31, in the 8200 block of Crenshaw Drive in Inglewood, according to Los Angeles County coroner’s records.

Austin was coming home from work shortly before 8:30 a.m. and was outside his apartment when a vehicle drove by and a person shot at him from inside, witnesses told the Inglewood Police Department.

He was pronounced dead at the scene at 8:39 a.m., according to coroner’s records.

Share a memory or thought about Dominique Lee Austin

hi,
was Dominique from Jefferson Park?

There's not a day that goes by that I don't think about March 31 Dominique was a loving person that's dear to many hearts and did not deserve what happened to him but to be absent from the body is to be present with the lord love you and miss you.

Seems like this man was a good person. Hope good police work will lead to his killer

i just want to say that my son was a Awesome young man, he did not deserve this at all, he was such a good kid and loved everyone that came in contact with him, he was very outgoing and was a workaholic always trying to figure out how to take care of his family whom he loved so much. Dominique will be missed but NEVER forgotten, i miss my son so much and the days are so hard, my life will never be the same. To Diane Montoya i would love to meet you, and Michelle Clemens please look for me on facebook. To whoever did this God said your day is his and he knows who you are. if there is anyone who has any information please call the number on this site thank you.

A loving mom who will never be the same, and that will fight for peace so the next mother wont have to fill the way i do,

I knew your parents before God blessed them with you. I remember you as a baby your Dad always had you and would bring you with him to our house. You and Brandon would play and your dad and Rico would be outside talking. He was such a proud Dad. He was happy to be a dad. I found out about what happen to Dommique weeks later and have not been able to get in touch with your dad.. My heart is so heavy. I wanted to be there for you and Mesha you were there for me when I lost my sister. Also when Rico went away you were there no matter where you were. I was sent a inbox through facebook that is how I found out. It hurts my heart to realize that a child that i held in my arms is gone. A good child at the hands of trash. I don't know where to find your dad or mom to let them know that I am here and to offer my support.. Nut if you are able to read this come by my mom's house, The house is bluish gray with a black iron gate. I love you brother words can't express how I feel the hurt and pain. Domminque I will always remember his smile. I will always love you, Love Auntie Michelle.

I've known this young man since he was 7 years old. He never bothered anybody! My heart goes out to his Parents.

Rest in Peace Dominique...you brought a lot of joy and happiness to so many people. And your smile will never be forgotten.

And to the Devil/ Coward who did this, God said Vengeance is mine!!!

My God what it's wrong with people embraced by the 7 powerful Evil forces and demons to carry out their dirty because greed,lust,hate,envy,pride,anger domain over their life and go destroy themselves and others at the same time....just reading the Crime report.So a man comes home from work, Monday morning some time at 8am and he's killed outside his house??.. No dignity or respect or any form of honor for a man to die like that. Theres no name for such cowardice from the perpetrator,that person should seek for forgiveness and Jesus!..

I give my Condolence to the Family of Domoniqie Austin from the bottom of my heart I am so sorry to the Mother and Father that this terrible tragedy has accured to you and your family. Dominique was a brave young man, it took a lot of courage and a big heart for Dominique to do what he did. Dominique is an Angel sent from God he truly is,I am so so sorry there are no words I can say on how I truly feel about this horrible tragedy. Please accept my apology and condolences..

You taught me so much ... I loved you still love you and will never forget you. You will forever be apart of the reason I'm a great woman... I love you more then I can find the words to express and say. Until we meet again . D&E forever !

This seem so unreal I was just talking to yu last week and now your gone I swear the good 1s die young yu just had a birthday we just turned 25 and what's so crazy yu got killed on my birthday smh 😔😔😢 I'm going to truly miss yu D yu always been a good boyfriend and a good friend we never had no disagreements...my heart goes out to your family I know yu was a family man and yu loved your family to the fullest they gonna miss me and me to may yu reSt n paradise and I'll c yu again 😘💜

Domo and I grew up together. I'll never forget our great times we shared together. Our first tattoos,cars& apartments. That was my lil bro and I was big sis. He didn't deserve to go out like that. I've watched domo grow from a boy to a young man. And I'm very proud of him. I will always love and miss you domo. I'll never forget our missions and random road trips. I love you bro forever.

Domo and I grew up together he was a good dude. We went through our first tattoos, cars and apartments together. We did everything together,that was my lil bro and I was big sis. I'll always cherish our missions lol battles on ps3 with our fav matchup suns vs. lakers lol. I always thought I would see you again bro. I'm gonna miss you my heart is heavy I'll never forget you or stop thinking about you.

Rest in Paradise Domo,
You will be greatly missed, didn't spend much time around u but from from the time that I did spend around you always made the atmosphere better with your goofy and silly personality, it's such a tragedy to see how your life was taken at such a young age, I'm praying that your family can have closure and whoever is responsible will be brought to justice, you were a kindhearted easy goin person that was taken away from us far to soon, may your soul rest in peace Domo, we miss u.

Dominique, was as much a part of my family as the rest of my family members, he really stepped up to the plate in his role as God Fathler to my great grand daughter, when her father Tyrone, Dominiques best friend passed. I know he is with our Lord , with Tyrone and his grandmother whom he loved so much.
Rest In Peace my second grandson, I hope to see you and Tyrone in heaven one day.
I will always love my boys.
Ruth