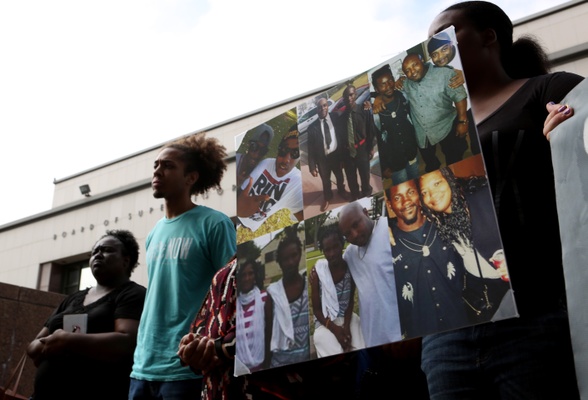 Initially, the department said Thompson was an armed carjacking suspect who had fired at deputies, but on Aug. 9, authorities said that the man had nothing to do with that crime or the assault on deputies.

“Knowing what we know now, do we wish it hadn’t happened? It speaks for itself,” said Capt. Steven Katz, head of the sheriff’s homicide bureau.

The incident began in the early hours of July 28, when a man used a gun to commandeer a 2012 gray Honda Civic at 48th Street and Crenshaw Boulevard in Los Angeles, Katz said.

About 2:32 a.m., a Compton sheriff’s deputy noticed the Civic driving erratically and pulled the car over.  A license plate check showed that the car was stolen. As another patrol car was arriving, the Civic took off, plowing through the fence of an elementary school and continuing west on Stockwell Street, turning onto Slater Avenue and then Compton Avenue before crashing into a parked car and then the curb.

At some point during the pursuit, a man, later identified as Robert Alexander, a 24-year-old black man, fired at the deputies, Katz said.

He fired again through the driver’s side window, and deputies fired back, according to Katz.  Then, he got out of the car and ran.

At a house in the 2200 block of Slater Street, Alexander pointed his gun at two residents on the front porch, saying he would kill anyone who approached, authorities said. He threw the gun under the couch, took off his clothes and got into a bed in a room where an elderly, bedridden woman was sleeping, Katz said, apparently in an attempt to pretend that he lived at the house.

Deputies found him there and took him into custody at 4:59 a.m.

Less than a minute later, a resident a few blocks away on West Stockwell Street called 911. He reported that he was taking out his trash when he noticed a man lying in his frontyard.

Deputies at the first scene were still working to identify Alexander and connect him to the carjacking, because they had briefly lost sight of him before the Slater Street resident flagged them down, Katz said.

Meanwhile, the deputy who arrived at West Stockwell Street noticed that the man in the frontyard matched the description of the carjacking suspect: black, 20 to 30 years old, wearing dark pants or shorts and a basketball jersey.

The deputy called over the radio that he believed he had found the carjacking suspect who had exchanged gunfire with deputies and that the man, lying motionless on the ground, may have been shot.

“I could see why they were thinking, ‘Yeah, that was our guy,’” homicide Lt. John Corina said.

Thompson did not respond to commands to show his hands, to stand up or to put his hands behind his head, sheriff’s officials said. SWAT deputies arrived and repeated the commands, but Thompson remained motionless, lying on his side with his left hand underneath his head and his right hand under his midsection, Katz and Corina said.

Even when the SWAT deputies set off “flash-bang” explosives, Thompson was unresponsive. Only when he was hit with foam bullets did he rouse himself, pushing himself onto his feet and “bolting” toward an armored vehicle, Corina said.

Deputies at the scene reported that Thompson had his right hand at his waistband as he was running, Katz said.A SWAT deputy in the turret of the vehicle fired at Thompson with an M4 rifle, striking him twice in the upper torso. He was pronounced dead at the scene.

The SWAT team was well protected from gunfire by the armored vehicles, but the deputy shot Thompson out of concern that he would run into the neighborhood and harm residents, Corina said.

Sheriff’s officials would not identify the deputy, who has been placed on desk duty during the investigation.

The fact that Thompson was not the carjacker would have no bearing on whether the shooting was legally justified, experts said. Ed Obayashi, a Plumas County sheriff’s deputy and attorney who serves as a legal advisor to several law enforcement agencies in California, said more important is the perception of the deputy who opened fire.

Law enforcement officers can legally use deadly force if they believe they are reacting to an imminent threat to their lives or the lives of others.

“The commands being ignored, they used less-lethal force that was ineffective, the guy was running away … those factors are very relevant in leading them to believe, ‘This guy has done something wrong. This is our guy,’” Obayashi said.

Investigators described Alexander as having an extensive criminal past. Court records show that since 2009, he has pleaded no contest to three separate counts of burglary, as well as charges of conspiracy and misdemeanor vandalism.

In connection with the July 28 incident, he has been charged with four counts of attempted murder, four counts of assault with a deadly weapon on a police officer, evading law enforcement, and carjacking, as well as a weapons count.

Thompson, who lived in Compton, had no criminal record, investigators said. Toxicology tests that would show whether he had alcohol or drugs in his system are pending, and investigators do not know why he ended up in a stupor in a stranger’s frontyard.

“That sort of is part of the mystery here,” Katz said. “It’s a terrible situation, and one of the questions we’d like answered is what brought him” there.

Brian Dunn, an attorney with the Cochran Firm, who is representing Thompson’s family, accused deputies of acting aggressively and failing to deescalate the encounter.

“The result is that we have an unarmed individual, who had committed no crime, who once again has been the victim of a law enforcement homicide,” Dunn said.

The incident is one of three in which deputies have shot unarmed men in the last two weeks.

William Bowers, a homeless man, was riding his bicycle in Castaic on Aug. 2 when sheriff’s deputies tried to stop him. He fled on foot, and a deputy opened fire, fatally striking him in the torso. Some witnesses said Bowers was reaching for his waistband, according to a sheriff’s official.

On Aug. 7, a man fled into a house in Lennox after he was caught painting graffiti. He survived after a sheriff’s deputy shot him in the torso as he was hiding in the shower.

Sheriff’s officials said those two shootings were still under investigation.

Family members described Thompson, who went by the nickname Little Bo Peep, as gentle and shy. He liked to play Uno at El Camino College’s Compton Center, where he also attended classes for people with mental disabilities, rarely losing unless his friends cheated, said Danielle Moore, 21, a former classmate.

His oldest sister, Matrice Stanley, said that “his age was 27, but mentally … he was probably 16.”

Thompson, the youngest of four siblings, lived with his father, relatives said.

“You had to be this close to hear him” speak, said his cousin Larmar Avila, holding a finger to his ear. “He’s soft-spoken. He was gentle. What was the threat?”

Photo: A poster with a photo collage of Donnell Thompson is held during a news conference with his relatives and members of Black Lives Matter in Long Beach. Credit: Katie Falkenberg / Los Angeles Times

Do you have information to share about the life of Donnell Thompson Jr. ? The Homicide Report needs your help. Please fill out this form or e-mail us at homicidereport@latimes.com.

Share a memory or thought about Donnell Thompson Jr.

You guys I think this was his fb page, so sad https://m.facebook.com/donnell.thompson.3382?ref=content_filter

As one reader stated, "Poorly Written" ... It's not that, it's the information given from Law Enforcement; they kept giving extensive details of another person, to psychologically have your mind taken focus off of the innocent person they killed.
Donnell Thompson, you are now in the presence of our Lord. We know that the Lord has used you for a greater purpose... Let's pray we all get an understanding from God's message to us...
Hebrews 11:4 By faith Abel offered to God a more excellent sacrifice than Cain, through which he obtained witness that he was righteous, God testifying of his gifts; and through it he being dead still speaks.
Isaiah 26:3 You will keep him in perfect peace,
Whose mind is stayed on You,
Because he trusts in You.

Very poorly written story! So confusing! Once again,they kill an un armed blackman& get away with it! How sad
& evil!

Don't know anything about him, but looking at his photo just breaks my heart. Rest in peace.