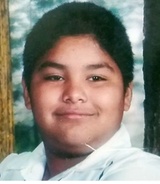 Erick Ivan Luna, a 16-year-old Latino, was shot and killed Monday, Nov. 13, in the 8600 block of Rose Street in Bellflower, according to Los Angeles County coroner’s records.

Erick was outside his residence around 8:30 p.m. when he was shot, according to Los Angeles County Sheriff’s Lt. Rodney Moore.

A man in his 20s also was shot, Moore said, but he is expected to survive.

Erick, a special needs student at Buena Vista High School in Lakewood, was pronounced dead at the scene at 8:45 p.m., according to coroner’s records.

Manuel Amaya, Erick’s cousin, told KTLA 5 News that Erick was walking on the driveway at the apartments where he lived when a car pulled up.

“He approached the car, maybe thinking it was somebody he knew, and somebody in the car just opened fire,” Amaya said. “He was a very naive kid. He was big for his age, but he was just a gentle giant.”

Erick turned 16 a week before he was shot. He was a quiet boy, even around his family, Amaya said. “He never ventured out or did anything. He was just always at home.”

KTLA reported that Erick’s mother was taken to the hospital with chest pains after learning about her son’s death, but she returned home later.

“She’s devastated. She’s heartbroken,” Amaya said. “My heart goes out to my aunt.”

Erick did not know the other man who was shot, Amaya said. He was standing behind the teen, and detectives are investigating whether he was the intended target of the gunfire.

The office of Paramount School District Supt. Ruth Perez is collecting money to help Erick’s family. Checks should be made out to the school district, in care of Buena Vista High School, and mailed to 15110 California Ave., Paramount, CA, 90723. Note “Erick Luna” in the check’s memo field.

Do you have information to share about the life of Erick Ivan Luna ? The Homicide Report needs your help. Please fill out this form or e-mail us at homicidereport@latimes.com.

Share a memory or thought about Erick Ivan Luna

What a bunch of morons driving around killing civilians rip