'Forgiveness' in black and white: A mural makes a positive point in South L.A. 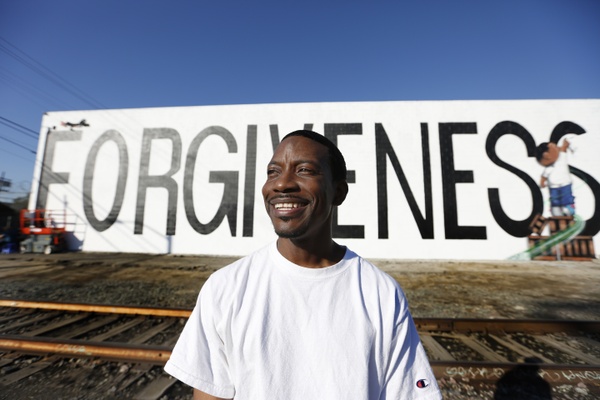 The wall of a warehouse facing the street had been painted white with black block letters that spelled out “forgiveness.” Harrison, 81, who has lived in the area for decades, told himself he had to meet the artist. “This is outstanding.”

On Saturday, he met the man behind the mural: Mike Norice. The Los Angeles-based artist, 36, grew up in the neighborhood and said the mural is his way of giving back.

"As an artist I know how it is, and I know there's a child I can reach who may need an outlet -- some type of positive image that can help them, that'll take them away from the gangs and the drug violence and the murders," Norice said.

Norice has plans to create 20 murals, of varying designs, in Los Angeles neighborhoods with high rates of violence. The piece near West Slauson Avenue and South Hoover Street, just a few dozen feet from railroad tracks, is his first and is in one of the deadlier neighborhoods in the county.

Ben “Taco” Owens, who leads gang intervention workers in the area, said there’s all types of writing on walls nearby, mostly done by gangs.

Corey Dantzler, chief executive and president of the Challengers Boys & Girls Club, said art could foster hope among young people in the community.

“Unfortunately in our community sometimes, kids don’t have hope,” he said, adding that Norice’s work could change that.

When Norice was trying to decide what to paint, he called his mother, who gave him the idea for the word “forgiveness.” Norice said that as he worked on the mural over the last few months, some people walking in the area approached and thanked him for putting his message out.

“That’s how I knew this was going to be a good thing,” he said.

I was driving past slauson when i seen this mural, it really stands out and i immediately knew why it was placed at that location. Hopefully it can reach the young kids in the area.