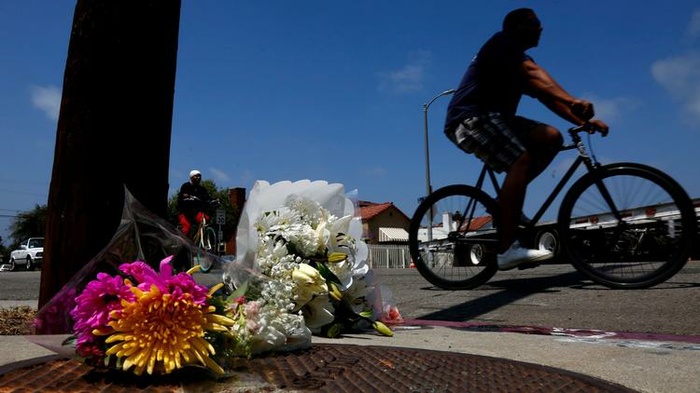 A 29-year-old gang member has been arrested and charged with killing a traffic guard at a Venice construction site last summer, authorities said.

Gregory Wherry was taken into custody in Mid-March and formally charged last week with the Aug. 3 fatal shooting of Marvin Ponce in the Oakwood section of Venice, according to a spokesman for the Los Angeles County district attorney’s office.

The slaying — on a street corner in broad daylight — stunned community members and Ponce’s co-workers. Witnesses described the gunman as wearing a black mask resembling something out of a movie, compounding the intrigue.

For months, Los Angeles police detectives searched through phone records and social media accounts related to Wherry and arrested him March 9. He pleaded not guilty last week to the charge and remains in custody on $2-million bail.

Wherry and Ponce were associated with gangs, and prosecutors allege Wherry carried out the killing because of his gang ties.

Wherry is a member of the Venice Shoreline Crips, a primarily black gang that originated in Oakwood and has held sway in the neighborhood for decades, according to multiple affidavits filed in court.

Ponce, 37, was associated with the Avenues gang, a Latino gang that formed in northeast L.A. in the 1950s. He had served more than a decade in prison after pleading guilty in 2001 to attempted murder involving other Avenues gang members, according to court records.

The case underscores how Venice struggles with violent street gangs even as it has become one of the city’s trendiest enclaves.

About 4 p.m. on Aug. 3, Ponce was at the end of his shift and cleaning up traffic equipment when a man dressed in black approached him, aimed a chrome revolver and opened fire.

Clad in a fluorescent work vest, his body lay in the street at 7th and Brooks avenues as detectives and coroner’s officials arrived at the scene.

Within an hour of the shooting, a tip forwarded to police identified the gunman as G-Roc — Wherry’s gang moniker, according to an affidavit filed in Los Angeles County Superior Court.

A second witness said he was riding his bicycle along Brooks Avenue when he saw a man near a covered gate wearing basketball shorts and a mask that resembled Hannibal Lecter’s from “The Silence of the Lambs.”

Despite the disguise, the witness recognized the suspect as G-Roc.

The witness rode off on his bike, and a minute later, heard two gunshots, according to court papers.

One image showed Wherry donning a facemask with airholes — similar to the mask described by witnesses, according to the warrant. The photograph no longer appears on the Instagram page.

The address he provided to officers was also in the Oakwood neighborhood, less than a block from the scene of Ponce’s killing, according to jail records.

For about three years, Ponce had worked for Right of Way, a San Dimas company that provides traffic control for construction sites, film shoots and other events.

His boss eulogized him as a “model employee” who treated colleagues with respect.

The sunny portrayal clashed with the violence Ponce and other members of the Avenues gang carried out on the night of Oct. 6, 1999, according to court records.

Ponce and three other Avenues members approached Hugo Cruz outside his apartment building and demanded money.

Cruz refused. Ponce and other gang members beat him, knocked him down and kicked him, according to court papers.

After dragging the man out of the apartment, Ponce and two others hit him and ransacked his apartment.

Ponce and another man took out guns and threatened to kill Cruz, who replied that he had no cash. He was shot in the head and leg.

Bikers ride past a memorial left Aug. 5 for Marvin Ponce, who was shot to death at the corner of 7th and Brooks avenues. (Genaro Molina / Los Angeles Times)

Then Ponce clearly got Karma for what he did before. And that is only the times he got caught.