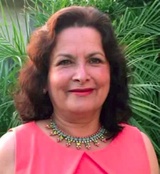 Rivera was in her home shortly before 11 p.m. when she was struck by gunfire that originated outside, according to a news release from the Long Beach Police Department.

Investigators believe someone was firing their gun on the street at the corner of East 10th Street and Cerritos Avenue, and that neither Rivera nor her home was the intended target, according to the release.

Rivera was struck at least once in the upper torso and taken to a  hospital where she was pronounced dead at 11:22 p.m., according to coroner records.

"This was a reckless display of criminal behavior," Chief Robert Luna said in the statement. He said the department was adding extra patrols to the area, and requested people with information to come forward.

Rivera, a mother and grandmother, was shot in the home where she had lived for more than 30 years, her niece Jenny Acosta told CBS2.

“We were just having a family gathering hours before that and now here we are,” she told KTLA 5.  “We’re just asking that if anybody in the community saw something to please let the authorities know. There needs to be some type of justice and closure for us.”

Do you have information to share about the life of Genoveva Robles Rivera ? The Homicide Report needs your help. Please fill out this form or e-mail us at homicidereport@latimes.com.

Share a memory or thought about Genoveva Robles Rivera