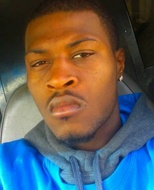 Gerome Lee Thomas, a 31-year-old black man, was shot and killed Friday, Aug. 25, in the 4400 block of South Western Avenue in Vermont Square, according to Los Angeles County coroner’s records.

Thomas was standing at the Master Burger restaurant about 6 p.m. with two others when a person walked up to him and shot him multiple times, Los Angeles Police Det. Dave Garrido said.

As the gunman fired, the two people with Thomas tried to run away. One man was struck in the calf, and the other man was not injured, Garrido said.

Thomas was taken to a hospital, where he was pronounced dead at 7:57 p.m., according to coroner’s records.

Detectives think the shooting was the result of a personal dispute, not gang related. The gunman ran south on South Western Avenue to a waiting vehicle, which fled the area.

Two brothers, Rubin Day, 21, and Christopher Day, 23, were charged Sept. 1 with one count each of murder, according to the Los Angeles County district attorney’s office.

The trio, all of whom are black, also was charged with attempted murder and assault with a semi-automatic firearm. The group also faces the allegation that the crime was committed on behalf of or in association with a criminal street gang, according to the district attorney’s office.

Rubin Day also faces an allegation that he discharged a firearm.

All three are due to be arraigned Sept. 19.

Do you have information to share about the life of Gerome Lee Thomas ? The Homicide Report needs your help. Please fill out this form or e-mail us at homicidereport@latimes.com.

Share a memory or thought about Gerome Lee Thomas

this is so crazy my high school friend. we were just talking about how much fun we had back in high school we had a whole moment laughing at how silly and playful you used to be back then. GOD makes no mistakes. rest in eternal PEACE Pnutt.

Forever your Jamaican one

This was One of my Lil buddies.. Seeing him on here is so heartbreaking. I almost forgot he transcended...
R.I.P.,Pnut.
That Monster Burger location is extremely dangerous... One of many murders... Sad.

SMMFH...this sh*t cra!! U were special to all that knew u!! So young n energetic, motivated, strong, solid, sexy.... Lol... SMH... U will forever b missed!! Thanks for the secretive, happy n fun times we've shared!! Cherished memories!! I LOVE U PNUT!! RIP!!