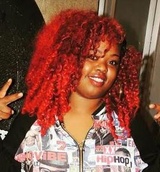 About 1:50 p.m., at least five people were working at a barbecue stand in a Pep Boys parking lot when a person walked up and began shooting, Los Angeles police Officer George Romulo said.

Dickerson and a 34-year-old man were struck by the gunfire, Romulo said. Police are reviewing surveillance footage in the area.

The suspect has been described as a black man who was wearing some sort of mask or bandanna around his face, Romulo said.

Dickerson was taken to a hospital where she was pronounced dead at 3 p.m., according to coroner’s records.

Police are still trying to determine a motive, but said Dickerson was not the intended target.

Dickerson, a Compton native, was an aspiring rapper who worked for a security company, the barbecue stand and Mom’s Burgers in Compton, said her mother, Valarie Holyfield. Dickerson, described as a caring and gentle person, was the oldest of six children.

“She was just a go-getter,” Holyfield said.

Inspired by the 2004 shooting death of her brother, 15-year-old Harvey Dickerson, Jennifer Dickerson began writing songs to express herself.

"She found her way of releasing her emotions through her music," Holyfield said.

Share a memory or thought about Jennifer Ann Dickerson

I miss you so much cousin. I was sitting here thinking of you today and my heart is broken. I pray we get answers and I am working hard in school if we do not get answers soon. I will not stop in my career until Justice is served. You deserve to be here with us. You never hurt anyone you were so kind and loving and always a good voice of reason. Life has changed for our whole family since your death but baby girl it will not be in vain O love always and forever your big cousin Tiff

I miss you so much..

I really miss you and that beautiful smile! Love you Jann always! Auntie Melinda

I'm jann mother her stage name i miss her so much her death has truly left me in disbelief every day of my life I still can't and I never will get over this tragedy has left me broken and overwhelmed with grief the holidays are here and it simply doesn't matter to me anymore she was so beautiful so loving and caring and had a way with words that would make you say wow she's really talented . I have met some of her friends that she worked with in the studio to hear someone say your daughter changed my life as such Joy To Know that she was truly an angel I'm not sure how to go on every day I have no agenda I just get up and repeat my days until it's over although I would like to believe that something good is going to come out of this i have to be honest I just don't feel like anything good is in this it makes me questioned my faith and all that I once believe everything that I grew up believing has been compromised due to this overwhelming tragedy that I have faced again 12 years ago i had to bury my son hard pill to swallow again she works so hard to fulfill her dreams and her dreams was a part of fulfilling some of my dreams and that's all taken away over a senseless act of violence it's so hard to imagine what good could be in there and people say to me everyday something good is going to come out of this and I haven't yet to believe that I'm back being paranoid hoping that this doesn't happen to me again because life is so unpredictable it will surprise you and catch you off-guard all at the same time she was here and was a very big help to all of us and we all miss her dearly I love and miss you more than life itself may use rest in peace until we see each other again mom

I love you forever and you'll always be a piece of me!

I miss and love you so much sister

Rip. So tragic. What a nice young woman she seemed to be. Condolences to the family. Rest in peace in heaven. God bless

I met Jennifer a few years ago. She was a motivated young woman with dreams and a heart as big as California. She worked very hard on her music and wanted to use it as a bridge to create opportunity for her community. She worked and traveled and was always supportive of other people chasing the same dream. She was an extreme pleasure to be around. Her huge smile was infectious and she will be sorely missed by the thousands of people she came in contact with and touched with her spirit. My condolences go out to her mother, family and friends. I just want them to know, if they didn't, how wide her reach was.