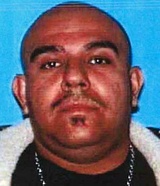 John Benjamin Alvarado, a 35-year-old Latino, was shot and killed Sunday, June 1, in the 900 block of North Alvarado Street in Echo Park, according to Los Angeles County coroner’s records.

Shortly before 2:45 a.m., Alvarado was walking southbound on North Alvarado Street when a gunman walked up to him and shot him, said Los Angeles police Det. John Motto.

The gunman then ran to a small red car that fled southbound on Santa Ynez Street, Motto said.

Alvarado was taken to a hospital where he was pronounced dead at 4:18 a.m., said Ed Winter, a coroner’s spokesman.

Do you have information to share about the life of John Benjamin Alvarado ? The Homicide Report needs your help. Please fill out this form or e-mail us at homicidereport@latimes.com.

Share a memory or thought about John Benjamin Alvarado