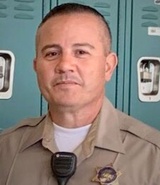 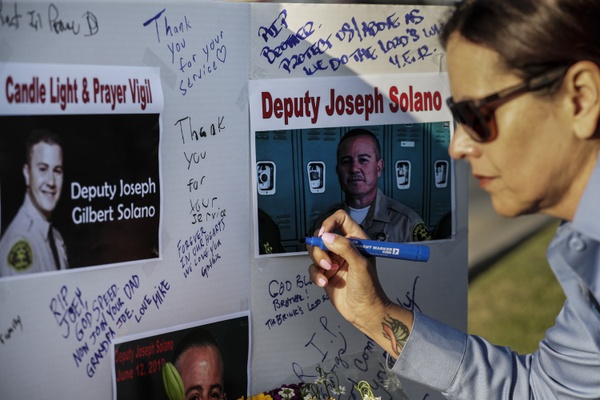 Joseph Gilbert Solano, a 50-year-old Latino deputy for the Los Angeles County Sheriff's Department, died Wednesday, June 12, after he was shot in the 2500 block of West Valley Boulevard in Alhambra, according to sheriff's investigators.

Solano got off work about 5 p.m. Monday, June 10, put on his civilian clothes and then ran an errand for his mother, taking her car to a Jiffy Lube to get the oil changed, The Times reported.

Solano went next door to a Jack in the Box restaurant at 2531 West Valley Blvd., and was waiting for his food when a man wearing sunglasses and a fedora walked up behind him about 5:45 p.m.

"We don't know if [the gunman] said something to him, but on the video you can see [Solano] turns to face him," said Lt. Derrick Alfred. "And that's when [the gunman] raises the gun and shoots him. He was shot basically from the front, in the top part of his head."

Solano was put on life support at Los Angeles County-USC Medical Center, the same hospital where, as a deputy assigned to the sheriff department's Access to Care Bureau, he had stood guard over prisoners needing medical care.

He was listed in grave condition and pronounced dead two days later, surrounded by family and fellow law enforcement officers, The Times reported.

The gunman drove away in a light-colored 2012 Kia Sorrento. A similar vehicle was involved in a shooting an hour earlier in downtown L.A. that killed Dmitry Alekseyevich Kolstov, 30, a Russian snowboarding champion who had been living in Mar Vista. The gunman apparently had a "brief verbal exchange" with Kolstov and his male companion in the 1900 block of East 7th Place, just west of Mateo Street, before he opened fire from his SUV, killing Kolstov, according to investigators.

Rhett McKenzie Nelson, 30, of St. George, Utah, was arrested the following day in Long Beach, after he allegedly called his father in Utah and "told him about committing murder in Southern California," according to sheriff's Homicide Bureau Capt. Kent Wegener.

Nelson's father reported the conversation to the Long Beach Police Department, and gave the officers the number that came up on his phone, allowing them to trace Nelson's call to a local church, Alfred said.

"He'd gone to the church and asked to use a shower, or something like that, and then found a phone and and called his dad from a landline," Alfred said. "He told him he'd killed two people, so the dad, concerned for his son, not knowing if this was true or he was delusional, called the Long Beach PD."

Officers drove to the church and spotted a Kia Sorrento driving away that matched the description of the SUV involved in the deputy's shooting. Alfred said the Kia was a gift from his parents, Jean and Bradley Nelson, shortly before they left for a trip on Memorial Day weekend.

When they returned, Nelson was gone and they filed a missing person's report on May 26, posting on Facebook that their son had left home without any clothing or his laptop and he wasn't answering his cellphone.

“He has a history of opiate abuse and has been clean for about six months," the post read, "but we know what a terrible struggle that is,” The Times reported.  Nelson called his parents on June 4, saying he was safe in Orange County, but they didn't hear from him again until after the shootings.

"My wife Jean and I, along with our family, are saddened beyond words to hear of the shooting of Los Angeles Sheriff’s Deputy Joseph Solano, and to learn that our son Rhett is being held in connection with this horrifying and senseless attack,” Bradley Nelson said in a statement released on June 11, adding that they were "cooperating fully" with the investigation and asking for prayers for Solano and his family.

Long Beach officers followed the Kia and arrested Nelson without incident a short time later, when his SUV came to a stop in a driveway in the 2400 block of Granada Ave. A revolver found in the vehicle was similar to the weapon used in the attack on Solano, Wegener said.

On June 13, Nelson was charged with two counts of murder in the shootings that killed Solano and Kolstov, one count of attempted murder of Kolstov's companion and two counts of robbery, according to the complaint filed by the Los Angeles County district attorney's office. After the two shootings, investigators believe Nelson was also involved in two robberies in Long Beach later the evening of June 10,  at a gas station and a 7-Eleven, The Times reported.

Nelson did not enter a plea. He is being held without bail and is scheduled to enter a plea on July 22 in Room 30 of the Clara Shortridge Foltz Criminal Justice Center in downtown L.A., according to court records.

Nelson is also a suspect in five armed robberies in the San Diego area from June 7 through June 9, The Times reported. In each of those cases, the robber displayed a handgun to a convenience store clerk at night, and in four of the incidents he made off with an undisclosed amount of cash, according to the San Diego Police Department.

Investigators have not identified a motive in either killing. There was no robbery attempt at the Jack in the Box, and Solano was not wearing his badge, gun holster or anything else that would have indicated he was a sheriff’s deputy, The Times reported.

Solano had worked 13 years with the sheriff's department, first in court services and the Twin Towers Correction Facility, but most recently within the department's Access to Care Bureau, which required  transporting particularly dangerous inmates or those who needed protection from themselves or others.

“He had that type of personality where he commanded respect but was also respectful. It takes that mild-mannered personality to gain cooperation from inmates,” said his captain, Tania Plunkett. “He had that ability to de-escalate and not let every little thing get underneath his skin.”

Another supervisor, Deputy Juan Rodriguez, said Solano’s maturity factored into the decision to give him the special assignment, which also involved making sure that inmates got to their medical appointments at L.A. County-USC Medical Center.

“His communication skills were phenomenal,” Rodriguez said. “Every time I spoke to him, I got that vibe from him, that he had that knowledge of being a grown-up.”

Solano’s calm demeanor earned him a family nickname of “J.C.,” which stands for “Joe Cool,” inspired by the sunglasses-wearing alter ego of Snoopy from the comic strip “Peanuts,” The Times reported.

Julianna Loza, the deputy’s longtime girlfriend, said his collected, sometimes reserved poise was a complement to her instinct for being outgoing and outspoken. The two met while working — her job, which she declined to identify, involves the criminal justice system — and bonded quickly.

“He just radiated positive energy. He was a genuine, caring, hardworking man,” she said. “We met people that were with him during his last breath, and in the story they told us, they said there was still a sparkle in his eye, and they didn’t even know him.”

When Solano was not at work, his life revolved around food and his family, loved ones said.

The Los Angeles-area native had a son and a stepdaughter, and was also the sole provider for his mother. He opened up during family gatherings, often goading others to dance and teasing that he could “cut a rug,” though he never showed off his moves, relatives said.

“He loved to eat. Anything he could get his hands on. And in fact, I was wondering why the hell he was at Jack in the Box because we were supposed to go to dinner that night,” Loza said, adding wryly that they had planned to eat salad.

The deputy, whose father was a firefighter and uncle was a police officer, stayed fit by running and swimming, Loza said. He was one of the first volunteers to run in a newly formed team representing the Access to Care Bureau in the Baker to Vegas footrace, a competition between law enforcement groups from all over the world.

“He inspired and encouraged other runners, and because of that, we were able to form a team,” said Plunkett, adding that the bureau will run in its first Baker to Vegas race early next year.

“We are going to run in his honor,” she said.

During a news conference June 12 announcing Solano's death, his stepdaughter, Jessica, said the deputy had been in her life for more than 11 years, becoming her father figure and best friend.

“All I ask is just don’t forget about him,” she said. “He was a hardworking man, and was loved by many, and he would want us to continue his legacy.”

Photo: Sheriff Deputy Cynthia Balderrama signs a memory board for slain Deputy Joseph Solano at a vigil outside the Jack-in-the-Box where he was shot. Credit: Robert Gauthier, Los Angeles Times

Share a memory or thought about Joseph Gilbert Solano