As she struggled to fit a couch through the door of the new location of her Studio City pet store, Rachel Kennedy sighed audibly, remembering a time when handiwork around the shop came easier.

Her brother, Josh Sutter, “could build anything,” Kennedy said. “He could fix anything.”

Standing under a painted memorial to Sutter that read “Always in my mind, forever in my heart,” Kennedy and Sandra Vasquez, Sutter’s girlfriend, laughed bitterly. He would have completed the task in half the time. 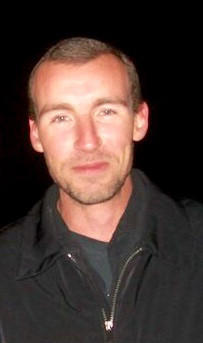 “We said, ‘Josh would have figured this out,’ ” Vasquez said. “We joke and we say every day, ‘How are we surviving?’ ”

In January 2015, Sutter, 36, was fatally stabbed in a Palmdale home that was meant to become a haven for rescue dogs. Last month, as the one-year anniversary inched closer, Ricardo Medina, 36, was charged in the killing.

Medina, who appeared in two versions of the “Power Rangers” television series, has claimed self-defense and contends that Sutter broke down the door to his bedroom, according to Medina’s attorney, Allen Bell.

The killing still doesn’t make sense to Sutter’s friends and family, who say he was defined by his love of animals and his calm demeanor. The idea that he died after an argument is still hard to process.

Sutter moved to Los Angeles in 2011 to help his sister open Lucky Puppy, which specializes in the sale of rescue dogs. He was a taskmaster during construction at the original location and after, she said, wielding tools and caring for the dozens of dogs scrambling around the store.

The dogs also had helped bring love into Sutter’s life. He began dating Vasquez one year before his death. They met at Lucky Puppy. Vasquez said she was drawn to Sutter’s warm nature and willingness to talk to anyone.

Sutter’s drive to care for the dogs led him to move to the Palmdale home where the killing occurred. Kennedy rented the ranch property with hopes of turning it into a “dog paradise,” a wide expanse for the animals she couldn’t place in a home.

Kennedy had previously hired another man — Medina — to care for the animals. But his behavior was growing erratic and concerning, she said. After one argument, Medina threatened to release the dogs into the wild.

Medina’s increasingly disturbing actions came to a head on Jan. 31, 2015. After an argument with Sutter inside the Palmdale home, police say Medina stabbed Sutter with a sword, killing him.

Sutter was on the phone with his father, Don, just minutes before the deadly confrontation with Medina, discussing ways to grow organic vegetables to feed the dogs at the ranch.

“There’s not a mean bone in him,” his father said.

At the new pet store, Kennedy clutched a vial of her brother’s ashes, trembling at the thought of his last moments.

Kennedy, who has a tattoo on her forearm that matches the painted memorial in the store, felt she needed to do more to honor her brother’s memory. Lucky Puppy’s new location opened Jan. 31, 2016 — the one-year anniversary of his death.