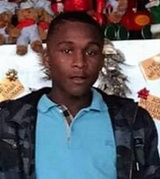 About 4:30 p.m., Patterson driving a car with a friend north on Grape Street when another car pulled up and a person in the car began firing bullets at the two, said Los Angeles police Det. Nathan Kouri.

The car, described as a dark-colored sedan, fled on East 113th Street and out of view, police said.

Patterson was pronounced dead at 4:45 p.m. at the scene, according to coroner’s records.

Neither Patterson nor the other man in the car were gang members. The motive remains unknown.

Family members said that Patterson was a man who was just discovering the value of hard work. He had to be on his way to work by 4:15 a.m. on most weekdays.

Patterson had started as a contractor at an oil refinery but had been hired full time because of his work ethic, relatives said.

But Patterson wanted more. He was studying to be an electrician. He was asking his mother about home prices with hopes of becoming a property owner someday.

He rarely took weekends off. On the day of the shooting, Patterson had a friend in town from Baltimore and was showing him around the Watts area.

Patterson was always helping his relatives. When his grand-uncle threw out his back recently, Patterson drove him to errands and kept up the house.

What pains his grandfather, Maurice Pinkney, is the loss of the man he was becoming.

“I never thought in a million years that this could happen to me,” said Lewis, a Navy senior chief petty officer stationed in Japan. “I’m serving for my country and my child is gunned down while I’m stationed overseas. It changes the way I think about everything.”

This article was updated with additional information about Kalease Patterson.

Do you have information to share about the life of Kalease Raymond Patterson ? The Homicide Report needs your help. Please fill out this form or e-mail us at homicidereport@latimes.com.

Share a memory or thought about Kalease Raymond Patterson

Never in a thousand years did i think you wouldn’t be here . You keep my middle school memories full of joy and chemistry class in high school was such a joy when you came back from Cali. My forever friend❤️ I remember our talks and it is such a shock to hear that you’re life ended so early in such tragedy . You never deserved this .. you wanted to be something. I will NEVER FORGET you goofball ❤️❤️

Kalease was a good kid. We went to high school together and played basketball. He always made me laugh, I’m sad