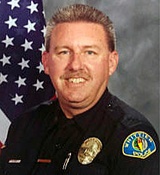 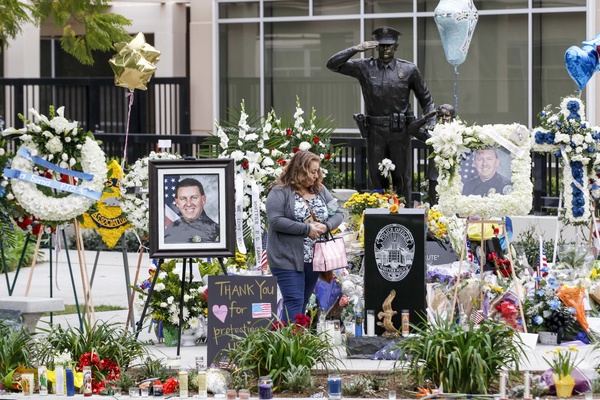 Whittier Police Officer Keith Boyer, a 53-year-old white man, was shot and killed on Monday, Feb. 20, at the intersection of Colima Road and Mar Vista Street in Whittier, according to authorities.

Boyer and two other officers were called to the scene to investigate a traffic collision about 8 a.m. when one of the drivers in the accident pulled out a gun and began shooting, Los Angeles County Sheriff’s Lt. John Corina told The Times.

The officers returned fire and three people were struck, including Christopher Michael Mejia, 26, a felon investigators would later learn was a suspect in the fatal shooting of his cousin earlier that morning in East Los Angeles.

Both Mejia and Patrick Hazell, a Whittier officer with three years on the force, were injured and taken to the hospital with injuries they are expected to survive.

Boyer, a 27-year veteran of the department who was considering retirement, was taken to UC Irvine Medical Center where he was pronounced dead later that morning, according to Corina.

“He was the best of the best,” Whittier Police Chief Jeff Piper said during an emotional news conference later that morning. He broke down in tears as he described Boyer as a close friend and beloved mentor in the department.

Boyer was the father of two sons and an accomplished drummer who regularly played with a class-rock tribute band from Temecula, called Mrs. Jones' Revenge, The Times reported.

Band leader Jeff McNeal said he initially had reservations about asking Boyer to join the band, fearing that “as a cop, he’s probably a Type A personality and he’s gonna want to be in control, but I was totally wrong about that.”

Boyer’s technical skill as a drummer “elevated” the band, McNeal told The Times. “He was extremely enthusiastic and very supportive, probably the easiest guy in the whole band. Always willing to play. He loved the music. It was his passion.”

The morning of the shooting, Boyer and the other officers believed they were responding to a routine traffic call and did not know one of the vehicles was stolen, or its driver was a murder suspect, Corina told The Times.

“It seemed like a simple traffic accident and the next thing they know they’re in a gunfight,” Corina said, “You never know when you respond to a call what you are going to run into.”

Torres was pronounced dead at the scene at 5:29 a.m. and his car, a Dodge sedan, was missing. Mejia was driving the stolen car when he rear-ended another car at the corner of Colima Road and Mar Vista Street later that morning, shortly before 8 a.m. about 20 miles east and south of where his cousin died.

Mejia, an imposing, 6-foot, 3-inch man with tattoos advertising his gang affiliation on his face and neck, asked the driver of the other car to push his silver sedan to the side of the road, The Times reported.

When the officers arrived, Mejia was sitting in his car, according to Corina. When he got out, he allegedly pulled a gun from the waistband of his pants and began shooting at close range.

Mejia is a felon who spent three years in prison for robbery and then another two years for stealing a family member’s car, The Times reported. Since his release from prison in April of 2016, Mejia has been jailed at least four times for probation violations, including methamphetamine possession and running from deputies, Corina told The Times.

His grandfather, Lino Mejia, told The Times that Mejia has struggled with meth addiction, and appeared to be using drugs again shortly before the shooting. He said he reported his grandson’s drug abuse several times to his probation officer, most recently on Feb. 15, but he still felt responsible for Boyer's death.

"I feel like it was our fault," he said. "Maybe we spoiled him."

Lino Mejia said his grandson had been staying with him in his East Los Angeles home since he was most recently released from jail on Feb, 11, The Times reported. The grandfather and Torres’ family live a few miles apart in East LA, Cotter said.

But Piper and other law enforcement leaders were not persuaded, saying too many criminals are being released without a proper safety net of mental health, drug rehabilitation and other services, The Times reported. “We need to wake up. Enough is enough,” Piper said during his news conference. “This is a senseless, senseless tragedy that did not need to be.”

Anyone with information is asked to call the sheriff’s Homicide Bureau, which is investigating the shooting, at (323) 890-5500. Those wishing to remain anonymous should call Crime Stoppers at (800) 222-8477.

As a Canadian living in Canada, i stumbled upon this page, it is saddening and heart wrenching that there are so many homicides in Los Angeles. So many families that are being ripped apart by violence. I honestly wish there was a solution but i don't think there can ever be one, because we teach this way of life with every generation and with some people violence is all they know. So sadly it is a cycle. I truly wish i knew a way we could end this. I am absolutely terrified to enter the united states.

Kimberly
I think everyone who is murdered is worthy of more than a couple of sentences.

Ana DeAnda,
Why not tell us the story behind your friend getting killed. Was it in L.A. County? It might be posted here already. Tell us his name we will look it up and get back to you on the answer you are asking. Not all stories are worthy of an article.

Wow this cop and my best friend got killed and this cop get a whole article and what about my friend, why doesn't anyone share their condolences with his family too

Wow! Why does this guy get an entire page dedicated to him, while all the others just get a location and time? Is it because he's white? Nah!

Keith Boyer came buy many of our apartment buildings in Whittier and Santa Fe springs on calls and I got to know him well he did great job with tenant problems and crime. Me and my wife heard the news when it happened on the radio and were so upset we just canceled our trip for the day to the casino and went back home. I was proud of him and his kids and family how good they were brought up and watching the funeral i was lost for words. I sat many times thinking this whole senario out and ive come to the conclusion god called Keith to come to heaven early for eternity and everyone remember we will all see him again. People need to be close to god, live a good life and be kind to others your soul needs to be ready for your judgement day when you die. This life on earth is just passing through.

I want to express my deepest sympathies, and condolences to the family of Keith Boyer.
So sorry to hear about his loss.
Godspeed!

I am so very sorry for the loss of Keith Boyer. My thoughts are with him