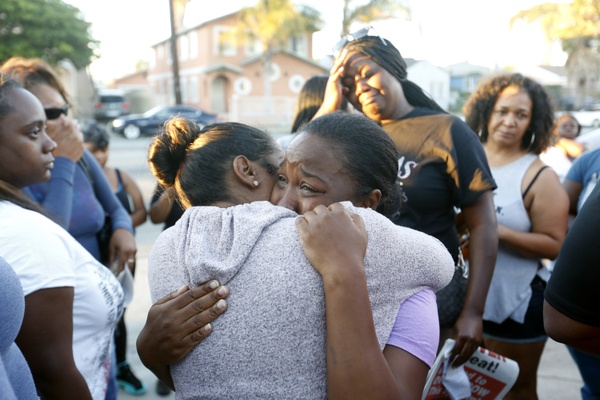 Kenney Watkins, an 18-year-old black man, was shot and killed by a Los Angeles police officer Tuesday, Aug. 16, in the 400 block of West Century Boulevard in Vermont Vista, according to Los Angeles County coroner’s records.

About 3:30 p.m., an officer on a motorcycle stopped a dark sedan in the area, Los Angeles Police Lt. Chris Ramirez said. During the traffic stop, Watkins, who was in the passenger seat, got out.

The officer told investigators he fired at Watkins because he saw Watkins start to turn toward him with a gun, said Det. Meghan Aguilar, an LAPD spokeswoman.

Watkins was pronounced dead at the scene at 3:48 p.m., according to coroner’s records.

No officers were injured during the incident. The officer who opened fire was not wearing a body camera.

The sedan was driven away, and police were trying to find it and speak to the driver and any other passengers who witnessed the shooting, Ramirez said.

A man who witnessed the shooting and spoke on condition of anonymity said he saw Watkins run from an officer before he was shot, then saw a gun near his body.

The person, who spoke on the condition of anonymity, said he was inside his house when he heard someone outside yell, “Freeze!”

He looked out his window, he said, and saw a young man running from an officer on a motorcycle.

The witness watched Watkins duck into a small, dead-end driveway on Century Boulevard, then turn back toward the street as if to keep running.

The witness said he then saw the officer kick a chrome handgun away from the man who had been shot.

One woman, who didn’t see the shooting, said she was inside her home when she heard someone yell, “Get down! Get down!”

Then she heard three gunshots.When she looked out her window, she said, Watkins was down in the driveway. She watched as police swarmed the scene, later covering his body with a white sheet.

“He died right there,” she said.

The woman, who also spoke on the condition of anonymity, said she saw a shiny gun in the driveway.

The LAPD said two handguns were found at the scene. When asked about the guns, a civil rights lawyer who attended a vigil for Watkins with his mother said they were skeptical of the police account and would investigate what happened themselves.

"We are going to question everything," attorney Caree Harper said.

Watkins was the 16th person shot by on-duty LAPD officers this year, according to data compiled by The Times. Of those, 13 were killed.

Police have not said what prompted the officer to stop the car, which sped away as the shooting unfolded. The officer who shot Watkins works in the LAPD’s Valley Traffic division, Aguilar said, but was working in South L.A. as part of the department’s efforts to curb violent crime in some of the city’s toughest neighborhoods.

The night after the shooting, dozens of people gathered in the small driveway where Watkins was killed, surrounding his mother as they prayed. Tears fell as people held hands and hugged. A sign with photos of the smiling teenager sat on a nearby fence.

Watkins' mother, Prescious Sasser, said she learned about the shooting on social media. Then her friends started to call. She went to the scene and waited for police to tell her more.

“I knew in my heart it was him,” she said. “I was just waiting for the confirmation.”

Sasser said her son was known for his smile from the day he was born, which was the day after Mother's Day.

His birthday "was like a double gift," she said — a special day for him, but also for her as his mother.

Sasser said her son was involved in his church and other groups. He ran track in the Junior Olympics in Baltimore. He walked in South L.A.'s Kingdom Day parade. He was almost done with school — he attended Duke Ellington Continuation High School — where he gravitated toward photography and computer science.

“He just had that winning smile and personality,” she said, her eyes teary. “He was my baby.”

Share a memory or thought about Kenney Ahmad Watkins

The police can be some dirty MF, but every minority killing isn't a homicide by police.Two witnesses saw the chrome.

Lapd claims to protect and to serve our communities, however most of them has added to our on going depression and adding to the problems we have.. They murder, rape, lie and set my people up with false evidence planting!e.t.c. so when the streets react and horrible things happen to corrupt cops.. Mabye some understanding one day will come into play..

Condolences for this young man's family. My thoughts and prayers are with you all. So sad to know that it appears to be open season on all black lives with the police who take an oath to protect us ALL.

An eyewitness confirms that the police officer kicked a chrome handgun away from the victim. Another eyewitness says she saw a 'shiny handgun' in the driveway. Investigators actually found two handguns at the scene. And yet your comments are essentially blaming the cops for the shooting. Put the blame where it belongs: on the guy holding the chrome handgun.

This is just sad. What amazes me is that they put "cause of death unknown". Now we all know that a LAPD motorcycle officer killed this young black man. It was short lived on the news. But every police officer from the Southeast Division on down to the 77th Division was present. Truth is we don't stand a chance.

Whats this like the 5th homicide committed by LA cops in under a month?