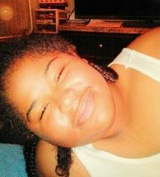 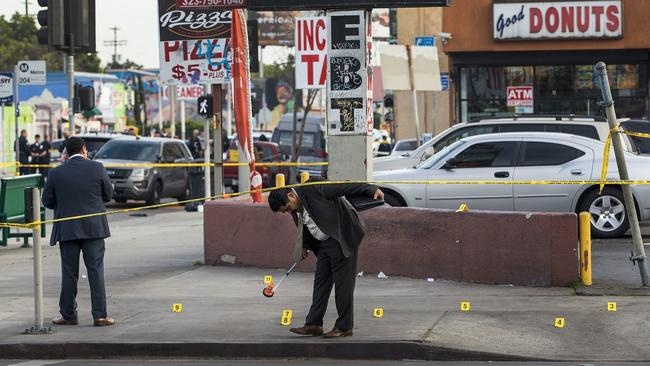 Kevin was walking with a 15-year-old boy and a 17-year-old girl about 3:45 p.m. when another teenager approached, asked about the group’s gang affiliation and shot Kevin and his companions, said Los Angeles Police Det. Chris Barling.

Witnesses reported hearing about 10 gunshots at the strip mall where the shooting occurred, said Officer Mike Lopez, an LAPD spokesman. The three teenagers were taken to a hospital.

Kevin Cleveland was pronounced dead at 4:49 p.m., according to coroner’s records.

The other two teenagers are expected to survive, Barling said. The shooting was near John Muir Middle School and Augustus Hawkins High School, and aerial images broadcast by local television stations showed a school bus near the scene.

“School had just gotten out, so there was a lot of people out here and a lot of potential victims,” LAPD Deputy Chief Phillip Tingirides told KTLA-TV. “We have three that were hit, and I’m just grateful there weren’t more that were hit.”

The gunman was described as a black male between the ages of 16 to 22, wearing jeans and a hooded sweatshirt, police said. He remains at large.

Kevin’s mother, who only identified herself by her first name, Ladrena, told KTLA-TV that she heard the gunfire and got into her car to try to find her son.

Ladrena said her son was wounded in the stomach and leg but was still able to talk, and she thought he would be OK. He got up and got on the gurney, she said.

Kevin, who had recently celebrated his 17th birthday, was not involved in gangs and loved to play video games on Xbox at home, his mother said.

My condolences to this family! I'm truly sorry for you loss! Its sad to see good youths get killed by some no good evil gang- bangers! I'm praying for you and your family! Also, I'm praying that you get justice because the police 🚔 needs to get these bad people of the streets! It's sad and too much violence! RIP KEVIN CLEVELAND!🌹

I only had the privilege to be around you once time. I remember the twinkle in your daddy's eyes as he talked to me and my husband about you and your mom. About how much he loved and missed you guys. So I offered to take him to visit you. I couldn't believe how much you two looked alike. You said hi to us and as your mom already mentioned( reg.
your love for video games) you went in the house to play your video games. You are a huge loose to the Cleveland family. You will always live in our hearts and memories. RIP LIL KEVIN CLEVELAND

Syscom3 has been a commentator on the Homicide Report for many years. And I, for one, appreciate his contributions. Like it or not, Syscom3 keeps it real and says some hard things that NEED to be heard. His comments, many of which are short and provocative, reflect a few common themes: 1) personal accountability for ones choices & actions (including the consequences), 2) a righteous indignation for the horrendous evil of inner-city violence and the 'gangster' sub-culture that supports it, 3) a deep compassion for the legitimate 'victims' of predatory violence and 4) a well-founded disgust toward the hypocrisy and inconsistency of social justice warriors. That's how I interpret Syscom3. His perspective is an important one and needs to be considered soberly when thinking about solutions to these complicated social issues.

God bless the family that has to deal with this tragedy.. So sad for a kid to get up for school and never come home,. I don't know these people but my heart goes out to you guys. I'm so sorry for you loss. I pray for you guys to get thru this. I know its very difficult but pray can will help. God bless.

To all who read this...L.A Times loves to see Syscom3 get people in an uproar cuz it does there homicide report a favor...without these people commenting at Syscom3 there wouldn't be many comments...I have written comments to Syscom3 challenging him/her to come to the communities and put in some work...he/she has refused to respond and at times L.A Times has made sure that my comments were not published...it amazes me that Syscom3 gets away with some of the comments that he/she does but when I challenge this person my comments get blocked...so my suggestion to the many readers of this blog is to ignore this clown...the only word he/she knows is sociopath without knowing the interpretation of the word...this person is either working with L.A Times or is actually the real sociopath...any clown that seems to be on this blog as much as Syscom3 is obsessed with making others miserable...this persons comments come right out of a gangster fairytale book....if u call a person a soldier this person automatically believes that is a code for gangster...however if u were in tune with religion many Christians refer to themselves as soldiers form the Lord...are we gangsters as well?...one final point...Syscom3 rarely has anything negative to say about Caucasian that are murdered....he has been repeatedly asked about this and he will refer back to four times that he/she has responded...however one of the biggest blogs on the HR was Brian Caufield whonwas murder in his apartment in Sherman Oaks...he was selling WEED illegally out of residence and was killed during an attempted robbery...Syscom3 had not one comment of the hundreds that were made...Why is that?...only this person can explain that...@ Megan Garvey you may read this and decide not to publish this but I have this saved in my documents so I will continue to put this up until it leaks through....Syscom3 seek counseling and quit aggravating the grieving...this HR is intended to make responses but somehow ur comments are always negative and pointless...these people that are murdered regardless of their gang affiliation were human beings...the problem with heartless people such as yourself is that u see an opportunity to cause more chaos and u pounce on it...that is the sign of a sociopath...

Syscom 3 We have really grown tired of your condesending remarks. It takes a really scummy type of person to sit back and make light of other peoples suffering. Black lives Matter is a group of people who came together to stop the mistreament of Blacks in these Communities which has been going on for years. If you were not so selective in the garbage you, O'Reilly and others love to spue you would know that. The Black Community has always been reactive to mistreatment and injustice caused by "OTHERS". We know exactly what is going on and why it is going on. We don't need some psuedo Social Scientist to tell us that. God Bless the family of these poor children and a hope that Law Enforcement locks-up all offenders no matter what the color. As for you Syscom 3 Crawl back under the Rock you came from and gives us all a break.

When are we gonna Stop this violence?

I used to live about a 15-minute bike ride from where Kevin Cleveland's death occurred. There's a lot of gangs feuding over there, and unfortunately this young man was caught up in the crossfire of this feud.

Cleveland and his friends were minding their own business and some thug on some paranoid BS wanted to end their lives. I hope the LAPD or the Sheriff's get the coward who did this, because this paranoid coward is going to try to take someone else's life when the attention around Cleveland's death goes away.

Rest easy little dude, you are in a better place now ! This world is full of evil. You are in heaven now, God will take care of you and your killers shall be damned in hell for eternity.

Well as sad as this tragedy is, I'm more disturbed by these lawless criminals preying on our kids, My God where n hell did these monsters come from, if they live at home with their parents, n eat n sleep n kill at will, how is it they don't know, it just goes 2 show evil lurks n our houses, 2 many of us r guilty cause we know these people r at least who they associate with.Until Blacks & Hispanics stop harboring these punks n turning the other ear, our community will keep being a safe haven 4 these assholes, R.I.P lil bro u didn't deserve this nor your friends, but I hope n pray he meets the same fate as u, only worse, n the parents who allow these creeps to live, breathe n sleep in their homes knowingly,SHAME ON U, u r just as guilty n God will take care of u, unless u put a stop to it .R your innocent child will b next.