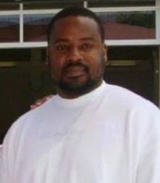 About 3:40 a.m., Jackson was found in the front yard of a home. Paramedics pronounced him dead at 3:57 a.m., according to coroner’s records.

The home where Jackson was found was not his own, but he had family in the area. It is unknown whether a gunman drove by or walked up to Jackson, LAPD Det. Rick Gordon said.

Police are looking for witnesses.

Share a memory or thought about Kinshasa Togon Jackson

Rest In Peace Dad ! I wish I would’ve met you longer.. I’m sorry to barely be finding out about your incident. To anyone reading this, if you know how I can contact my dad’s sister Natasha Jackson. Please let me know.

Miss U Kin...I sit n the front yard till this day thinkN you gone pull up on me and chop it up but i know them days are gone my friend...i lost a true FRIEND with You.I laugh and kry when i think about you Brother...YOU will live on with me....Rest Well!!

I miss you relly,we were more like brothers than cousins.I thank you for always having my back and teaching me things you thought i needed to know.we all love you and miss you.and ill see you when i get there.tell pops I love him and i miss him too.

Uncle I love you and I miss you. Uncle you are one of the greatest people I have ever known and I will forever admire you. Rest in peace Uncle Kin Love you always and will never forget the humble,charasmatic, understand ing,and loving person you are.

Almost 4 months later and we still missing you like Feb 13, 2015. I love you so much. I still cry thinking about you. You were the BEST brother in the WORLD and God knew you were best fit to be my brother. I love you Kin..
Anyone who may read this with any type of information regarding this case please contact the police and talk to them. This has really devastated my family and all we want are answers and a chance to heal. Justice for Kin..

Rest easy brother. You did not deserve to be taken from us like you were. We love you, but God loved you more. I will always have a special place for you in my heart.