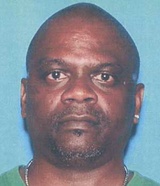 About 11:15 p.m., Los Angeles Police officers responded to several calls of shots fired in the area, according to a news release from the department.

Officers found Calhoun on the sidewalk. Calhoun was pronounced dead at the scene at 11:35 p.m., according to coroner’s records.

Detectives believe that Calhoun and another person were standing in front of an apartment complex when two men walked up and fired multiple rounds, striking Calhoun and the other person.

The other person was taken to a hospital and is expected to survive. The gunmen were described as two black men wearing black hoodies. Both were seen on foot fleeing north on South Van Ness Avenue, police said. Anyone with information is asked to call West Bureau Homicide at (213) 382-9470. Those who wish to remain anonymous can call Crime Stoppers at (800) 222-8477.

Do you have information to share about the life of Landry L. Calhoun ? The Homicide Report needs your help. Please fill out this form or e-mail us at homicidereport@latimes.com.

Share a memory or thought about Landry L. Calhoun

We never met face to face. You in L.A., me in NY. We spoke every week. We teased and laughed with eachother every chance we got. We became friends over the yrs, you having my back always. You'll be in my heart.and thoughts ALWAYS. Miss you so much baby baaa-by.

My condolences to his folks, especially his brother James. Rest In Peace, homie.

I love you Landry.

My condolence's to all who loved Landry friends and family, He was a great person and is gone way to soon!!! RIP Landry

Sorry to hear this. Prayers going up for his family and friends. Especially his brother James. RIP Landry.