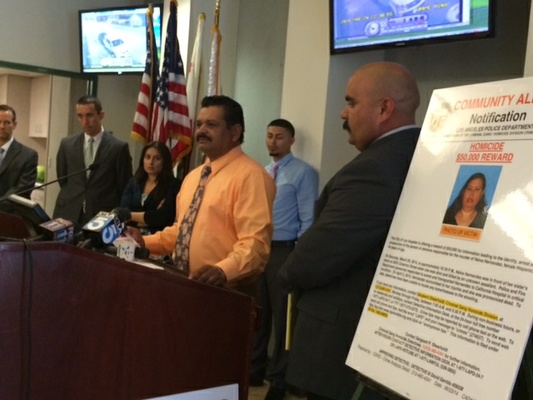 Los Angeles police detectives on Wednesday announced two separate $50,000 rewards for the unsolved killings of a 45-year-old mother of two and a 26-year-old father of four.

In the killing of Roshon Dwayne Davis, detectives have had access to minimal security footage in the area. Though the stabbing occurred about 2:45 p.m. on Jan. 29 near a bus stop at South La Brea Avenue and Coliseum Street, police are still looking for people to talk to about what they saw.

"Somebody had to have seen what occurred," Shearholdt said.

After Davis was stabbed, he ran to the back gate of his apartment building and collapsed. His wife held him in her arms until paramedics arrived.

"My son didn't deserve what happened to him," said Gwendolyn Porchia, his mother. She described Davis, a father of four small girls, as a family man.

In the killing of Nelva Hernandez, the only significant clue is surveillance footage taken from a nearby business that may show the vehicle from which the gunman fired. The vehicle, a light-colored Mercedes GL450 SUV, is shown turning onto Rodeo Road from Cimarron Street, where the March 29 shooting occurred. 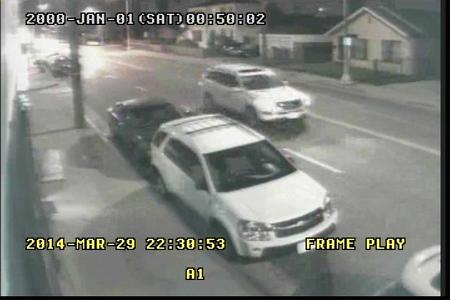 At about 10:30 p.m., Hernandez was in a silver SUV with other family members, including her husband, her sister, two nieces and a 2-year-old toddler when she was hit by a bullet in the back of the head. The bullet was inches from hitting the child. Hernandez died a week later.

The gunfire, which is believed to be gang related, was intended for another person, whom police are also looking for, Shearholdt said.

"In seconds, our whole family's life has changed," he said. He begged someone to come forward

."These criminals do not need to be out on the street free," he said.

Photo, below: A still of surveillance footage showing the suspected vehicle that the gunman shot from. Credit: Los Angeles Police Department

The Detectives have much more credibility and confidence with the public than Charlie Beck does. So lets hope some good citizens step up to the plate and help the Detectives and start to take their City back.