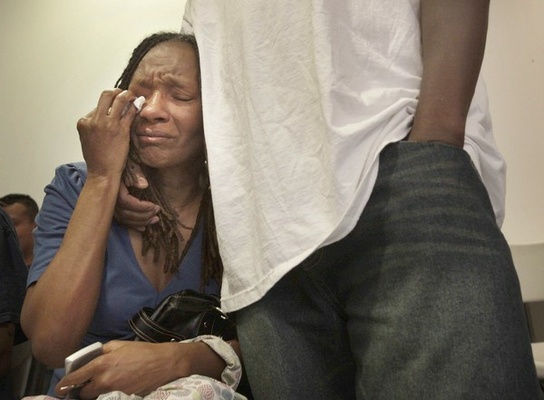 After a lengthy internal investigation, LAPD Chief Charlie Beck recommended that the civilian commission that oversees his department rule the shooting justified. The commission disagreed.

Times reporter Joel Rubin, who covers the LAPD, obtained a redacted version of Beck's report. An excerpt of his story begins below. What do you think of the opposing conclusions drawn by the commission and the chief?


The civilian commission that oversees the Los Angeles Police Department has taken the rare step of rejecting a recommendation from the department's chief, ruling that two police officers were wrong when they fatally shot an unarmed autistic man last year.

Police Chief Charlie Beck concluded after a lengthy internal investigation that the officers made serious tactical mistakes during the brief, late-night encounter, but ultimately were justified in using deadly force against Steven Eugene Washington, 27.

About midnight on March 20, Officers Allan Corrales and George Diego, who worked in an anti-gang unit, were driving in a marked patrol car along Vermont Avenue in the city's Koreatown neighborhood. Both officers told investigators they heard a loud noise — one described it as a "deep boom" — behind them, according to Beck's report on the incident.

The Times obtained a redacted version of the report, which conceals the officers' names. Because of the redactions it is not possible to tell what role each officer played in the shooting.

Looking behind them, the officers saw Washington walking on the sidewalk in the opposite direction. They turned the car around and drove slowly behind him. The officer in the passenger seat rolled down his window and called out to the man, the report said. The officer told investigators Washington turned toward him, gave him a "hard" look, then reached into the waistband area of his pants, according to the report.

The officer who was driving pulled up alongside Washington. From a few feet away, his partner saw a dark object tucked into Washington's waistband and, convinced it was a gun, drew his own weapon and pointed it at the man, according to the report.

Washington, according to the officers' account in the report, turned abruptly and began to walk directly toward the patrol car as the driving officer brought the car to a stop. The officer in the passenger seat told investigators Washington had a "blank stare" as if in a daze and ignored orders to raise his hands.

From the car, the officer fired a single shot, then ducked down below the window. The shot struck Washington in the head.

Washington had no weapon.

Kim, how about cops getting more training to recognize mentally ill people? Also, thank Ronald Reagan for putting all the mentally ill out in the streets. Ironically, he ended up with Alzheimers. Talk about what goes around comes around.

After reading all the homicide reports I can understand why officers would shoot someone that fails to obey an order and remotely appears to have a weapon. An autistic person should be supervised and cared for. It is not anyone's fault; merely another casualty of the lack of care provided to the mentally impaired coupled with a high crime rate. I feel badly for the family and the officers.

"What do you think of the opposing conclusions drawn by the commission and the chief?"

Two comments in one weeek? Not many comments getting past the cencors?

Head on over to China where you have like minded people filtering ideas that you want the public to see! The cencors and powers that be of this so called news orginization have no business in the U.S.

Talking to you Meaghan!

This section of the LA Times is completely worthless! Put it to bed.

The commission disagreed and the Chief still takes a stand and disagrees with them. So what's the purpose of the commission if there decision don't mean anything? Are these cops going to be held responsible for taking an innocent life away? I didn't know staring at someone is considered life threatening. Absurd!

My heart goes out to the family of this man MURDERED at the hands of the police. "Serious tactical errors" resulted in a mans death..someone needs to pay for this. Hope this chief is voted out of office...

I agree with the chief.