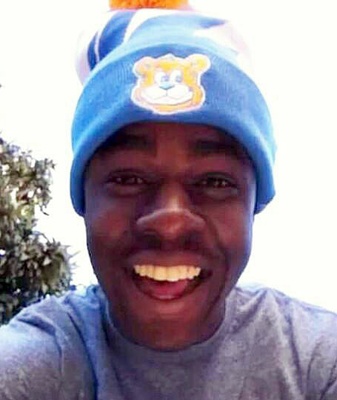 Lionel Gibson, a 21-year-old black man, was killed by police officers on Saturday, May 7, in an alley behind Locust Avenue at 21st Street in Long Beach, according to records from the Los Angeles County coroner’s office.

News releases from the Long Beach Police Department say six officers shot Gibson after he reached toward the butt of a gun in his waistband. But an attorney for Gibson’s family, which is filing a wrongful death claim against the city, said witnesses told him that Gibson had his hands in the air when the officers began firing.

Gibson's gun was an airsoft replica assault rifle, according to the news release. Airsoft guns are non-lethal firearms used for games and military practice.

Long Beach police went to the area at 4:46 p.m. after the department received a call about "a man with an Uzi ... standing next to a vehicle and talking to three individuals," according to a department news release.

When officers arrived, they saw Gibson and another man standing next to a vehicle with two men inside, the release said, and they "observed the butt of a gun exposed from" Gibson’s waistband.

The officers "gave several verbal commands" to Gibson and his friend to put up their hands, but Gibson reached his hand toward his waistband and the officers opened fire, according to the release.

Gibson was pronounced dead at the scene at 5:04 p.m. with multiple gunshot wounds to the head and chest, according to coroner’s records.

No one else was injured in the shooting, but officers arrested the two men in the car, Long Beach Police Sgt. Bradley Johnson said. Police say German Gallardo Rios, 21, had a handgun. He was arrested on suspicion of being an ex-felon in possession of a firearm. Erick M. Corrales, 23, was arrested on an outstanding warrant charging him with a vehicle code violation. The third man standing near Gibson was not arrested.

Airsoft guns are marked with an orange tip on the muzzle, which people sometimes remove to make the weapons look more realistic. In its news release, the department provided a photo of Gibson's replica gun; it does not appear to have an orange tip.

Peter Carr, the attorney for Gibson’s family, shared a video taken by someone who lives next to the shooting site. The 8-minute video includes a loud volley of at least eight shots from the officers about 24 seconds in, and then commentary from the people inside the house, as they watch the scene unfold.

After the shooting, a woman's voice says, “He had his hands up.”

“He had a gun or no?” asks another woman.

The video shows several police officers standing and shouting orders, but Gibson and the men in the car are not visible. Carr said he is eager to learn whether the officers involved were wearing body cameras and to see footage from surveillance cameras at a restaurant nearby.

Gibson had just left his girlfriend’s house and was walking to where he lived with his grandmother, a few blocks away, when he was confronted by the officers, Carr said.

“Lionel Gibson had not committed any crime and the officers did not have any probable cause to arrest Mr. Gibson,” Carr wrote in the claim he mailed to the city May 27.

“The officers negligently assessed the circumstances presented to them and violently confronted Lionel without having probable cause.... While Lionel complied with the officers’ demands by holding his hands up, the officers repeatedly and unjustifiably fired multiple deadly rounds ... causing Lionel’s death.”

He got into trouble in high school with a burglary charge and probation violation,  Corley said, "but he graduated as valedictorian" at Soledad.

Gibson was the second oldest of Corley's four children. The family moved to Georgia in 2013, she said, but Gibson missed California, and returned in 2015.

After his return, Gibson had several misdemeanor charges in the Van Nuys area and spent seven months in jail for vandalism and petty theft convictions before he was released in March, according to Los Angeles County jail and court records.

"He's had dealings with the police before, but he's never resisted or been defiant with them. And the things he did, they've never been anything violent," Corley said.

"The day he was confronted by those police officers, he'd done nothing that warranted him dying. You'll not see me at the weeping wall, because I'm angry. I believe this was excessive force. My goal is to make them change their policy, because there are other things they can do."

Her son was writing a book of fiction —"I would call it an urban novel" — and had recorded some rap songs, she said. He'd been looking into college programs, at her urging, because he wanted to learn sound engineering.

The family plans to have a memorial service for Gibson at the beach because that was his favorite place to be, she said. Just before they moved to Georgia, Corley got everyone together for a family outing, and Gibson said he knew the perfect spot — Laguna Beach.

"He was 18, but he was in the water more than any of the other kids, playing with a beach ball, body surfing.... He'd come in, grab a few bites to eat, but he couldn't wait to get back in the water," she said. "Just the joy on the face, that's the image I'll always remember."

The Long Beach Police Department is still investigating the shooting. Anyone with information or video of the incident is asked to call the department's Homicide Detail at (562) 570-7244. Those wishing to remain anonymous should call Crime Stoppers at (800) 222-8477.

Do you have information to share about the life of Lionel Gibson ? The Homicide Report needs your help. Please fill out this form or e-mail us at homicidereport@latimes.com.

Still living through this injustifiable HOMICIDE AB392 is JUST a TIP of the iceberg that is striving to create and bridge the social injustice and genocide that society wants us to believe is a "norm" let's ask ourselves (be honest with your true self)How many times have we sat in OUR OWN livingrooms asking ourselves (hell even others) What was or did that person do to get shot by the KKKOPS? In some cases nothing in some cases everything.. However Who is to judge? the "police" should apprehend and detain, not be JUDGE JURY & EXECUTIONER....IJS

I miss my brother that was my bestfriend and now he's gone. Im not okay. I cant see his face i remember when me and my mom first moved to georgia he was so happy to see us again. To see his smile is what i miss to hear his laugh or to even wake two hours before it was time to go to school because hes going through the drawers and closet lookong for an outfit for me ill always the way he could make me laugh when i felt like life was just to much... hr did my first tattoo for christ sakes my brother was no menace. I love you soooo much jr❤😢🙁😗

still heartbreaking.. litigations begin 12-17 my hopes are that these people are charged for murder.

When he was in Georgia me and his sister used to hang out all the time. I talked to him a few times, he could cook his butt off that's for sure. I'll miss you bro

Kid with prior police record reaches for a gun while ignoring police commands? That's how you get shot. His "rap songs" also had lyrics about shooting people and cop-killing, sounds like a good boy who dindu nuffin

That Was My Nephew. He Lived With Me When He 1st Came To Atlanta Ga. He's A Good Young Man. I Didn't See The Reason Why The Police Had To Kill Him In Cold Blood.

My heart is broken, and I am angry. So many times you hear about this happening, to our black youth. This young man was Lionel Gibson he wasn't a gang member or robber he was a son, grandson, brother, uncle and my nephew. Lionel Gibson had a life and a family that loved him.

My son was murdered. He was complying with the Long Beach Police, that was his neighborhood HE WAS NO THREAT to ANYONE, Let alone the "officers" WHATEVER happened to protect and serve?