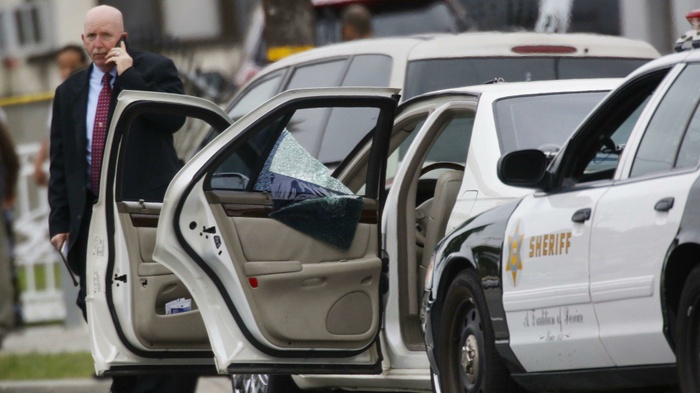 Luis Garcia, a 25-year-old Latino, died Thursday, May 25, after he was shot by a Los Angeles County sheriff’s deputy in the 900 block of North Santa Fe Avenue in Compton, according to sheriff’s investigators.

Garcia allegedly fired on two deputies during a traffic stop about 11:40 p.m. on Wednesday, May 24, said Lt. Joe Mendoza. One of the deputies was struck by gunfire as he opened the back door of the car in which Garcia was a passenger.

The injured deputy and Garcia were taken to a hospital.

Garcia was pronounced dead at the hospital shortly after midnight on May 25, Mendoza said.  Coroner’s records are unavailable because investigators put a security hold on the autopsy results until their investigation is completed, Mendoza said.

The deputy was struck in the arm and the torso. He was wearing a protective vest, and his injuries were minimal, said Sgt. Guillermo Morales.

“That’s what saved his life,” Morales said. “He was very lucky.”

One bullet went through the deputy’s arm without causing any major damage, Morales said. The deputy was treated at the hospital and released.

Garcia was in a car with two women who were sitting in the front seats, Mendoza said.

The deputies pulled the car over “because of a couple of traffic violations they saw,” Mendoza said

One deputy stood by the driver’s window, talking to the driver, while the other went to the passenger side, Mendoza said.

The driver was asked to get out of the car, and then the second deputy went to the passenger side of the car  “because the guy in the back seat was making furtive movements…moving in a way that made them worried for their safety,” Mendoza said.

When one deputy opened the back passenger door to talk to Garcia, "that’s when the suspect opened fire,” Mendoza said.

A handgun was found at the scene, Mendoza said. Investigators believe Garcia was involved in a gang.

The women in the car were detained for questioning but were not arrested, Mendoza said.

Anyone with information about the shooting is asked to call the Sheriff’s Department Homicide Bureau at (323) 890-5500. Those wishing to remain anonymous should call Crime Stoppers at (800) 222-8477.

Photo: Police investigate the shooting in the 900 block of North Santa Fe Avenue in Compton on May 25. Mark Boster / Los Angeles Times

Do you have information to share about the life of Luis Garcia ? The Homicide Report needs your help. Please fill out this form or e-mail us at homicidereport@latimes.com.