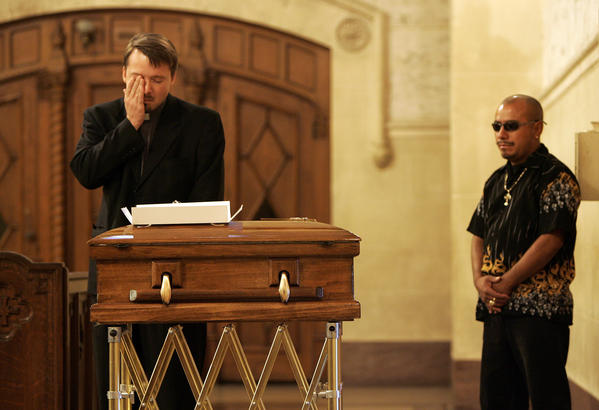 Luis Garcia, a 23-day-old baby boy Latino, was killed by a stray bullet, and a 37-year-old Latino man was wounded near the intersection of 6th Street and Burlington Street -- not far from MacArthur Park -- at about 9:30 p.m. Saturday, Sept. 15, said Dt. Fred Faustino of LAPD Rampart station. The infant's time of death was listed as 10:06 p.m.

The mother was pushing the baby in his stroller as she shopped for clothes spread out on the sidewalk at a vending location at this busy, informal outdoor market spot near Home Depot. The suspects, three Latino men or youths with shaved heads, walked up to the vendor and shot him in the chest. One stray bullet hit the baby. Both the man and the baby were transported to California Hospital Medical Center. The baby died. The man is listed in stable condition with gunshot wounds to the chest.

A $75,000 reward was offered for information leading to an arrest in this case--$25,000 more than is usually offered. The case also was immediately assigned to LAPD's elite Robbery-Homicide Division and drew widespread media attention. It's worth noting, however, that homicides in LAPD's Rampart division have been down by 33% this year. With just 15 homicides this year, the precinct ranks about ninth among the city's 19 precincts in killings. LAPD's Newton and 77th Street precincts to the south have each had nearly three times as many murders this year as Rampart, with 41 apiece.

Also worth noting is that 14 robbery-homicide detectives were sent to investigate this one case.

The other 14 people killed in Rampart division this year continue to have their cases investigated by Rampart's normal cadre of precinct detectives--that is, six detectives, total.

Update: Police announced Tuesday that 19-year-old Luis Silva had been arrested and charged in connection to this killing.

Share a memory or thought about Luis Angel Garcia

That is so good they caught someone in this homicide. It is so sad to hear that a lil boy did not even get to see his first bday. May you rest in peace lil one