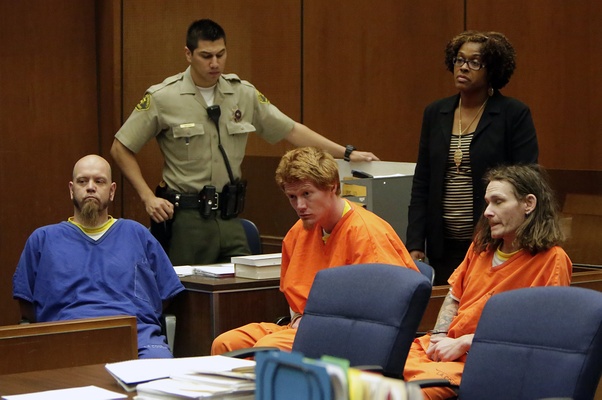 A 27-year-old mentally ill man on trial in the fatal stabbing of a woman near the Hollywood Walk of Fame pleaded no contest Tuesday to involuntary manslaughter, according to the Los Angeles County district attorney’s office.

On June 18, 2013, Dustin James Kinnear was accused of stabbing Christine Calderon, 23, after demanding money from the woman. The incident prompted increased patrols around the tourist destination.

According to court testimony, Calderon and her friend, Robert Harden, were walking down Hollywood Boulevard when the pair snapped a photo of a sign they found funny with their cellphones.The sign was held by Brian Joseph Widdows, 35, who demanded money from the two. Kinnear also wanted money, and an altercation happened during which another man, Jason Joel Wolstone, 34, put Calderon in a headlock.

During the fight, Kinnear got on top of Calderon and, at some point, stabbed her. As Calderon and Harden ran away, Calderon pulled up her shirt and revealed a stab wound. She died at a hospital hours later.

In the trial, Wolstone denied asking for money. He testified that Kinnear, also known as “Red,” had come out from an alcove and had gotten “nose-to-nose pretty much” with Calderon.

Kinnear is expected to receive 12 years in state prison when he is sentenced Oct. 10.

Photo: Dustin James Kinnear, center, at his arraignment in October 2013. Co-defendant Jason Joel Wolstone is to his right and a third man, Brian Joseph Widdows is to his left. Credit: Irfan Khan / Los Angeles Times

theres more fellow teens there that are linked to more crimes. the cops know it and everybody knows it. i can relate an article about being homeless in hollywood. i can give out specific detail. about alot of things if interested u can call 218 242 90 40. and ask for justin thanks.