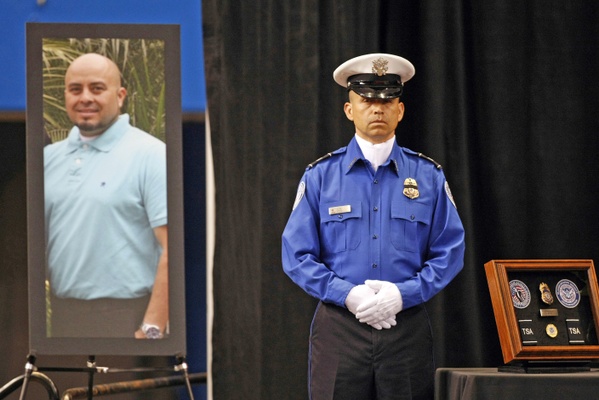 By Kate Mather and Matt Hamilton

An unemployed motorcycle mechanic who gunned down airport screening officers at Los Angeles International Airport in a 2013 attack that sent passengers running for their lives pleaded guilty Tuesday to murder and 10 other charges.

As part of the plea deal, prosecutors agreed not to seek the death penalty against Ciancia, 26, but the murder charge carries a mandatory sentence of life in prison.

There were 10 other felony charges. The weapons charges carry a mandatory 60 years in prison. A federal judge will eventually determine the terms of Ciancia's punishment.

“I’m an advocate for the death penalty. It’s unfortunate that he took a life and still he’s not going to be found guilty and put to death,” McClain said. “If it helps bring some closure to the family, I’m all for it.”

That level of preparation by the New Jersey native was revealed in the plea agreement filed last week. Ciancia, who had been living in Los Angeles for about 18 months before the shooting, had purchased the Smith & Wesson semiautomatic rifle nearly seven months before he stormed the terminal.

To conceal his weapon, he tied two pieces of luggage together and fashioned a case, according to court papers. On the morning of the attack, he asked a roommate to drive him to the airport for a trip home to New Jersey, and en route to LAX, he sent text messages to his siblings, with vague descriptions of his plans.

“I'm so sorry that I have to leave you pre-maturely, but it is for the greater good of humanity. This was the purpose I was brought here,” he told his brother.

To his sister, Ciancia wrote that he had to “stand up to these tyrants.” He asked his sister not to let the media distort his actions.“There wasn’t a terrorist attack on Nov 1. There was a pissed off patriot trying to water the tree of liberty,” he wrote.

Ciancia’s siblings grew concerned by the text messages and alerted police. Officers paid a visit to his apartment in Sun Valley, but U.S. Rep. Michael McCaul (R-Texas) later told reporters that police missed him “by a matter of minutes." Inside the terminal, Ciancia removed his gun from a bag about 9:15 a.m. and aimed it at Hernandez, who was near a podium checking passengers’ travel documents before they headed to an upper-level checkpoint, according to court papers.

Hernandez, shot, fell to the floor and Ciancia proceeded up the stairs toward the TSA’s security checkpoint. About halfway up, he turned and saw Hernandez’s body move.

Ciancia walked down the upward-moving escalator and, at point-blank range, fired more rounds. Hernandez was shot 12 times in total, according to court papers.

After returning to the upper level, Ciancia spotted two other TSA officers and opened fire as they fled toward the gate area.

Authorities said he continued along a corridor of shops, and a third person, a teacher, was also injured. Meanwhile, passengers took cover, and as Ciancia walked, he inquired if they worked with the TSA, witnesses told investigators. If they said no, he moved on.

About 9:25 a.m., he was shot and captured by airport police near a circular area of passenger-boarding gates. Authorities recovered a total of 500 rounds of ammunition Ciancia took to LAX.

Inside his luggage, investigators recovered a handwritten and signed note that mockingly said it was approved by Janet Napolitano, the former secretary of the U.S. Department of Homeland Security.

The note blasted the TSA for its “Nazi checkpoints” and the presumption that “every American is a terrorist.”

He said his mission would be a success if he killed just one TSA representative during his rampage. In addition to disrupting travel for nearly 170,000 people, the deadly attack led to security reforms.

Officials found the emergency response was hampered by poor communication and a lack of coordination among aviation and law enforcement agencies.

Ciancia, whose defense attorneys did not respond to requests for comment, was shot in the head and leg during a gun battle with airport police. He spent two weeks recovering at a hospital before he was transferred to a federal detention center in Los Angeles.

The Associated Press contributed to this report.

This why having the DP is advantageous they roll over and plead to life without to avoid the needle.