Many witnessed a shooting, but no one has come forward 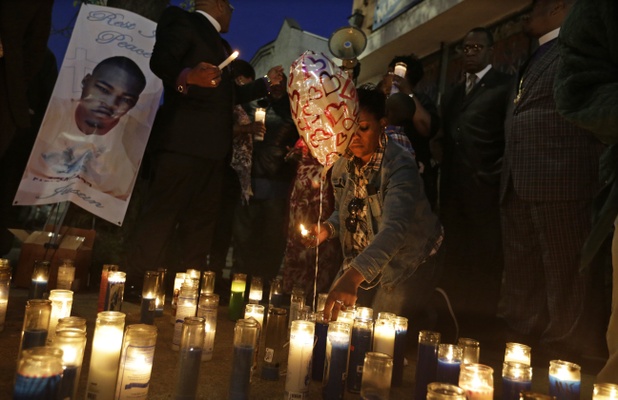 As the sun set, a mother slid out of an SUV and walked toward a waiting crowd. Blue and white candles, some lighted, flickered on the sidewalk below a banner bearing the face of her 19-year-old son.

"Nobody wants to talk, and everybody is on mute," J. LaKiesha Marshall told the crowd. "This is all senseless, you all. We need to stop this."

Marshall's son, Justin Logie, was gunned down about 2 a.m. on March 20 only a few feet from where she stood. Police said that at least 100 people were gathered nearby for an event when Logie was shot. By the time police arrived, no one had stuck around to talk. A local television station interviewed a man who said that the shooting was over a woman, but so far, investigators have not been able to corroborate that account.

So on Monday, Marshall and dozens of others gathered at the shooting site not only to mourn, but also to ask for witnesses to come forward.

"Speak about what happened to her son," Bishop K. Donnell Smith, a local activist, implored the crowd through a megaphone.

Mun also urged people to speak up. "Without those voices to say what happened," he said, "we will never solve this case."

Though each homicide case is different, there is a common and historical theme for detectives like Mun working in South L.A.: reluctant witnesses. It's for a variety of reasons, including distrust of police and not wanting to be seen as a snitch. Self-preservation sometimes trumps any willingness to come forward.

A recent article in the Homicide Report profiled a family waiting for a break in the case of Brandon Shorts -- who was shot in a busy intersection and died in 2010. In May, Lemuel Andres Goode was at a party in Chesterfield Square with at least a dozen people when he was shot. He died 12 days later. Police believe the gunman was part of the group that was there.

Eventually, cases like Goode's are put together piece by piece.

"It's about detectives working on the witnesses," said LAPD Det. Chris Barling, who supervises homicide investigations in the LAPD's 77th Division, where Shorts, Goode and Logie were killed.

Justin Logie, described by his mother as a "gentle giant," dreamed of one day opening a barber shop. A cousin described him as a generous, family-oriented man who doted on his 5-year-old brother.

"He would give his shirt off his back just to keep the next person warm," Bianka Logie said.

At the gathering, a pastor asked mothers who had lost a loved one to violence to come forward. One by one, women embraced Marshall. Some spoke about being tired of seeing candles on the streets and hearing the same narrative of the "homies" being tough but scrambling when something goes wrong.

"Every one of you is Justin," she said. "I know the hopelessness and worthlessness that you feel. I never want you to end up like Justin."

Spears runs a nonprofit called Seeking Peaceful Solutions, which offers support services in anger management and domestic violence and also works for the Center for Grief and Loss for Children at Hathaway-Sycamores. Though Spears works with those who have lost loved ones, she says the loss of her grandson has made her numb. "The trauma is in my home," she said Tuesday.

Toward the end of the vigil, a cousin sang while Marshall cried. At times, her sobs turned into moans. "Baby, you will never be forgotten."

This has got to come to an end