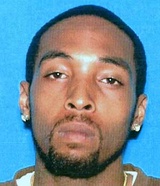 Marquette Bryon Carter, a 28-year-old black man, was shot and killed Tuesday, June 24, in the 4800 block of South Western Avenue in Vermont Square, according to Los Angeles County coroner’s records.

Carter and Monique Brittanyann Campbell, 21, were sitting in a black Hyundai shortly before 11 p.m. when a light-colored sedan pulled up next to them and multiple shots were fired, said Los Angeles Police Det. Chris Barling.

Carter was taken to a hospital where he was pronounced dead at 11:25 p.m., said Ed Winter, a coroner’s spokesman. Campbell died at the scene.

Do you have information to share about the life of Marquette Byron Carter ? The Homicide Report needs your help. Please fill out this form or e-mail us at homicidereport@latimes.com.

Share a memory or thought about Marquette Byron Carter

Miss you cousin! Told you gone but NEVER FORGOTTEN!

I still see this and cry with so much tears R.I.P Uncle Quette We Miss U Smfh 😪😪

Hey cuzso! I was just browsing through the l a times homicide reports and came across someone special to me (you), which touched home.. It was a trip how we came to find out that we were related... lol... I'm thankful that I was able to get the chance to know u although I admit, I wish our bond would've been prolonged longer ... however, its all good , GOD gave me some time and I'm thankful for that within itself... anyhow , cousin I love you! I know GOD got u and I'll never forget you. Gone but never forgotten! RIP Love!:-*

Alright I see my last comment was considered either to real or too real of a personal attack. ..its alright because the people responsible for this senseless crime will be brought to justice soon ...they have already left a trail of evidence everywhere so I'll just sit back sip on my tea and watch u fellas try to out smart the police.

@ghostie....clearly no one cares about what you have to say or how your feel no one in this life is perfect...so what he made a few decisions in life that you dont approve of get over it...obviously your mother made a mistake in teaching you that if you dont have anything nice to say you should'nt say it at all...your taking things personal... you mad or nah....oh well...this is probably the same person speaking that I had to remind that karma goes both ways but lets see how you feel when its one of your family members dead...smh your a low life to be on this blog down talking the dead...loser get over yourself...and no my brother didnt have monique killed the loser who pulled the trigger did cause he knew she could id him...my brother was set up and the truth will prevail....

My nephew whom I Love So Dearly words can't express how I'm feeling right now. Just the thought of you bring me to tears. Save a space for me cause u already know Aunty Vachan still have your back! Until we meet again.<3

Ive known quette over twenty years now i remember when he was like 7 or 8 busting back flips quette being cousin of one of my other longtime freinds Tyrell i would see everday in the hood we were born and raised west la on the courts of robertson park we had plenty battles but when we were done go hit toms and split some frys with seasoning salt on them.He would always call me"Shep" even though i moved out of la and now to vegas he would always hit me up when he came to vegas, smh i just seen him like a month ago when he came down..all i know is i loved this dude and he will be dearly missed a true West la king has fallen.....Rip Marquette carter god bless his kids and his mother with the strentgh to get through this horrible time

Marquette is Cousin to my son Sean Dillard, who looked up to him and loved him very much. He was always fun to be around. Prayers to his Mother Tonya and family. Very sorry for your loss.

Ive seen him grow up from a boy to a man, i always thought he would be short forever with his lil ducktail...until he passed me. lol
Quette was the sweetest most laid back person, it was hard not to love him. You will forever be missed cousin. forever in our hearts

I use to take Marquette to Robertson Park in West LA I have 3kids by his mother, he is my stepson and older brother to my kids. We played a whole lot of 1on1 games at the park, at first I would win most of the games then he became a very good player, I will admit he got me a few times, he was very determined in the things he did, and I will always remember our battles on the court they were some of the best times in my life.i called him SpudWebb on he court cause I was taler than him but he made up for that cause he had hops. GOD take care of my little buddy and tell him Im sorry for what's happened and Much Luv.