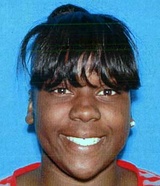 Monique Brittanyann Campbell, a 21-year-old black woman, was shot and killed Tuesday, June 24, in the 4800 block of South Western Avenue in Vermont Square, according to Los Angeles County coroner’s records.

Campbell and Marquette Bryon Carter, 28, were sitting in a black Hyundai shortly before 11 p.m. when a light-colored sedan pulled up next to them and multiple shots were fired, said Los Angeles Police Det. Chris Barling.

Campbell was pronounced dead at the scene at 11:14 p.m., said Ed Winter, a coroner’s spokesman. Carter was taken to a hospital where he died.

Do you have information to share about the life of Monique Brittanyann Campbell ? The Homicide Report needs your help. Please fill out this form or e-mail us at homicidereport@latimes.com.

Share a memory or thought about Monique Brittanyann Campbell

I will always remember you and how you and you were a smart girl we will find justice for you rest in peace will all my heart.

I miss you so much Monique! I often come here and look at recent homicides. It saddens me to see so many of our young die in these streets. This isn't how things should be. You shouldn't be gone. You should be enjoying the new year. You should be spending time and making unforgettable memories with your daughter, family, and friends. I don't know what happens in the afterlife, or if the afterlife even exist, but I pray that you are happy and at peace. The person responsible for your death hasn't been brought to justice yet. That hurts, but, even if the police never catch him, he hasn't escaped anything. God is always watching! I love you, I miss you, God bless!

My deepest sympathy to the family and friends of Monique, may you all find comfort, hope and strength from God's word the Bible at Acts 24:15 and Revelation 21:4

I recently found out about this. I'm so sorry for her families' loss. I'm sorry for finding out months after. I was friends with her during elementary school and a bit of middle school. I remember during my high school years, I saw her working at a theater. I recognized her because she still looked the same, just taller. I even ran up to her and was super excited to see her again. We talked really quickly and shortly, since she was working. She hadn't changed. She was very cheerful and had this same laugh. She'll be remembered for it.

This is so tragic. I am so sorry this happened. Prayers to her surviving family and friends. What is wrong with our town and why can't we fix it???

Your girl is okay.

Monique was my baby girl like my little sister she been with my brother since they were 13 and 14 they have a daughter together 16 months old who will miss her mom forever... I love Monique she always told me she love us just like she loved her real brothers and sisters she was so happy to have they daughter. I remember her I remember saying Mo I been looking for a job but not body calling me back they playing... u will be loved and missed KD BAD I know what you were doing dont worry my brother still loves you always and forever like you told you... Mo can I be at the hospital wi th you when you have your baby both our first child we were due 2 weeks apart I said ugg no you gone see my stuff I never had a baby so I figured she would be looking at my stuff and it wouldn't have been like that now I know... Mo can I do yo hair all this hair and don't know what to do with it... I remember me going to they house and the babie playing together... I just took her a couple of months ago to get her license she was so happy biggest smile I ever seen on fher I was so happy for her I remember her saying no Mo I haven't been studying I said you gone pass today if you don't pass the first time we go e sit her and study that paper and you gone take it again today she laughed she passed the first time I figured she would cause she was smart She said Mo I don't have money I said stand in line imma pay she said no im not dressed take me home imma get dressed real quick I said okay... when I had my son everyone came... she was a beautiful young woman I told her and my brother yall going to school next semester she said yeah I already checked in I told my mom I needed a labtop cause I wanted to find a job she was happy about her labtop her mom got her... happy smiling all the time making jokes I miss you I been waiting for you to give me a signal that your in a better place so I feel beter I miss u I love my niece I told you thats the closest thing to a daughter imma have im not havingno more kids and you wwould start laughing saying Mo why... I said how many you gone have (as many as god gives me) I started laughing... I remember you and Dave picking out names I remember you wanted a boy I said what you gone name him if its a boy David Jr I don't even have to ask right... you said yep and I wanted a girl nether one got what we wanted but we were happy still... you will be missed why did you have to go like that I wanted you to be happy plz come and let me know ur happy at pease in a beter place watch my baby girl my niece my cutie pie rest in peace my girl imma be missing you Dave willaalways love you

Monique was my baby girl like my little sister she been with my brother since they were 13 and 14 they have a daughter together 16 months old who will miss her mom forever... I love Monique she always told me she love us just like she loved her real brothers and sisters she was so happy to have they daughter. I remember her saying Mo I been looking for a job but not body calling me back they playing... u will be loved and missed KD BAD I know what you were doing dont worry my brother still loves you always and forever like you told you