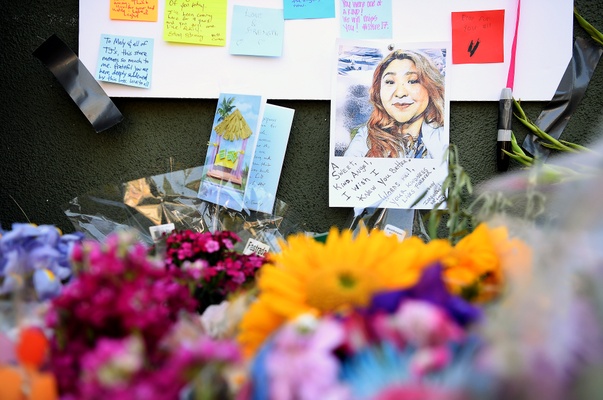 Corado, the manager of a Trader Joe’s market, was killed by police gunfire in an hours-long standoff with an armed suspect, police said three days after the shooting.

“On behalf of myself and the rest of the Department, I want to express my deepest condolences and sympathy to her family and everyone that knew her,” LAPD Chief Michel Moore said of Corado. “I know that it’s every officer’s worst nightmare to hurt an innocent bystander during a violent engagement. I spoke with the officers this morning — they’re devastated. They were devastated in the immediate aftermath of this event.”

Initially, it was unclear whether the gunfire that killed Corado was from the suspect or police. LAPD released car dashboard and body camera video earlier than is typical “in order to frame the circumstances that these officers found themselves in,” Moore said.

The incident began about 1:30 p.m. Saturday after officers from the LAPD’s Newton Division responded to a call regarding a shooting. Police said a 28-year-old man shot his grandmother at least seven times and hurt another woman near East 32nd Street.

Hours later, police located the car by tracking its anti-theft device, sparking a pursuit. The driver shot out the vehicle’s back window while firing at police before the car crashed into a light pole outside the Trader Joe’s in Silver Lake, officials said.

Atkins and the officers traded gunfire outside the store, according to witnesses and police. Atkins, who was struck in his left arm, ran inside, trapping 40 to 50 people in the store, and a hostage negotiation ensued. Several people could be seen crawling out the market’s windows, while the gunman allowed others to leave.

Bloodied and unnerved, Atkins paced the inside of the store, holding a gun and shouting as terrified hostages hid behind food displays.

Cyrani Ackerman, 49, told The Times she was walking toward the checkout line with her 19-year-old daughter when the screech of tires sent her scrambling.

As gunfire began to erupt outside, many customers fled toward the back of the store, either cowering in bathrooms or ducking in aisles as far away from the melee as possible.

“Seven of us were hiding in the back behind the bread,” she said. “There was a lot of shots fired.”

The gunman stayed near the front of the building with about five employees, according to Ackerman, who said at some point, the gunman noticed people had found ways to exit the store. He ordered one of his hostages to walk the aisles and round up anyone else who was hiding, including Ackerman and her daughter.

Ackerman said she noticed a lot of blood in the store. She said she overheard the gunman talking to police as he demanded to speak with his grandmother and referred to someone being dead. The comments caused her and others hiding inside to grow even more fearful.

After a three-hour standoff, Atkins surrendered to police. He is expected to survive his injuries, Moore said.

Atkins faces 31 charges, including one count each of murder, kidnapping, fleeing a pursing peace officer’s vehicle while driving recklessly, grand theft, driving or taking a vehicle without consent, shooting at an occupied vehicle and assault with a firearm, according to the Los Angeles County district attorney’s office.

During a brief appearance in a downtown courtroom Tuesday, Atkins waived his arraignment until Aug. 14. Dressed in a blue jail shirt and pants, Atkins showed little emotion as he stood in the defendant’s box surrounded by several deputies.

Charlene Egland, the suspect’s cousin, said Atkins was taken in by his grandmother at a young age. His mother suffered from drug addiction, and his father was sentenced to a lengthy prison stretch when Atkins was 8, Egland said.

Police records show he was arrested on suspicion of vandalism in 2008, but it does not appear he was criminally charged, according to public records. Atkins’ grandmother also sought a temporary restraining order against him in 2010, court records show, but Egland said the woman eventually took him back in.

Atkins had been dating the woman who was injured during Saturday’s melee for several months, but his grandmother did not want her in the family home, according to Egland. The woman had started visiting the home again in recent days, and an argument over the situation prompted Saturday’s confrontation, she said.

“I’m sad to say she didn’t make it. My baby sister. My world. I appreciate the retweets and the love,” Albert Corado tweeted Saturday. “Please respect my family’s privacy as we are still coming to terms with this.”

Condolences for Melyda Corado spread both in the neighborhood and on social media.

“I worked with her for years. I am so so so sorry. Such a lovely, sweet, friendly, hardworking woman. I was thinking about her the whole time, and it’s just incomprehensible,” one former Trader Joe’s employee wrote on Twitter.

The store also released a statement that read in part: “We remain heartbroken over the tragic death of Melyda Corado and the trauma our crew members and customers have suffered.

“Mely was a valued and beloved crew member. Our sole focus remains on supporting her family and those involved in Saturday’s horrible ordeal in Silver Lake. Out of respect for them, we will not be providing further comment on today’s developments, but do want to again express our appreciation for the overwhelming outpouring of support from customers and crew members across the country.”

Note: Law enforcement has placed a hold on information about Corado’s death with the Los Angeles County coroner’s office, prohibiting the coroner from releasing information such as time of death or ethnicity to the public. The Times will update this article when the hold is lifted.

Photo: A portrait of Melyda Corado, who was shot and killed at Trader Joe’s in Silver Lake, is pinned to a memorial outside the grocery store on Monday. Credit: Christina House / Los Angeles Times

Do you have information to share about the life of Melyda Corado ? The Homicide Report needs your help. Please fill out this form or e-mail us at homicidereport@latimes.com.

Take comfort in knowing that conscience never dies, and life and love is eternal! Melyda Corado is now in the loving arms of our INFINITE MOTHER called LOVE! I hope her family can take comfort in their awareness to see her as eternally with them and her crew members at Trader Joe!

RIP mam
I'm sorry you got caught up in this crime spree.