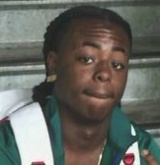 Monyae Ikeyli Jackson, a 15-year-old black male from Long Beach, died Tuesday, May 15, two days after he was shot in the 300 block of West Manchester Avenue in Florence, according to Los Angeles County coroner’s records.

Shortly before 1:30 a.m. on May 13, Monyae and three other teenagers were walking east on West Manchester Avenue when they were shot, said Los Angeles Police Det. Chris Barling. It's unclear where the shots originated, Barling said.

All four teenagers were wounded. La’marrion Upchurch, 15, who was with the group, was pronounced dead at the scene.

Monyae was taken to the hospital, as were the other two teenagers, who were treated and released, according to police. Monyae was pronounced dead on May 15 at 2:03 a.m., according to coroner’s records.

Detectives are looking into the motive for the shooting, Barling said.

Bridget Green, Monyae’s mother, told KTLA-TV that the teenagers traveled from Long Beach to attend a party in the area.

Green said her son was well-liked and played football.

The LAPD of 77 st killed my nephew. The officers made a conscious decision to delay the medical care of my nephew Monyae Jackson. Instead of contacting EMS to have him receive the care that he needed , the two officers chose to hand cuff him, stereotype him as a gang member while my nephew continuously asked for help from the responding officers. The officers chose to say inappropriate things to my nephew and continued to ignore his request for immediate help regarding his gunshot wound. The officers sat my nephew down handcuffed until he collasped. With the officers making inappropriate statements regarding his death and covered my nephew with a black sheet and threatened the other boy to now start talking because my nephew was "now dead". 77 st Lapd killed my nephew Monaye Jackson. They should be held accountable for their actions. They assisted in the death of my nephew. They should be placed under investigation without pay and reprimanded for the very bad choices and neglect. They allowed a 15 boy to die !! Justice will be sought for the roles and the participation of all the officers involved in the death at the hands of the law of Monyae!!!

May the good Lord Yeshua bring comfort to his mother and other family members. All I can say I understand exactly how his mother and friends feel. Just google my name and my sons incident is chronicled in a few local write ups.
Not sure if I’ve ever met this young Man personally, however if Nason Buchanan was his mentor he was a solid young man. Often it seems that the young brothers we invest our time and energy in are being murdered and leaving this realm of human experience much too soon. My only son was murdered back in 2009 and I still struggle with weather or not I did everything I could to love, nurture and guide him down the righteous path. To my brother Nason I know your heart is heavy and feeling a certain kind of way. Continue to be vigilant and don’t stop Mentoring those who will allow you to.
Praying for the families strength and may Yahweh keep you in perfect peace.

Man, sorry to hear this. Knew him from Dymally High School. He was just out from juvie trying to get his life right. RIP young man.