A snapshot of L.A. County's 19 homicides in a week that was defined by killings elsewhere 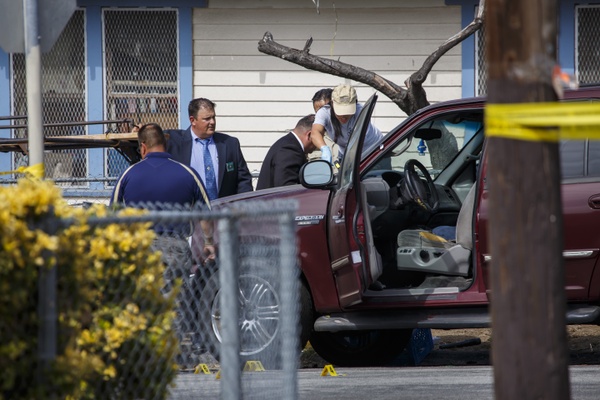 On the Fourth of July, before the nation was transfixed by graphic footage of police killing Alton Sterling in Louisiana and Philando Castile in Minnesota, before five law enforcement officers were killed in an ambush in Dallas, Los Angeles County Sheriff’s Det. Phil Martinez found himself squinting at the sky at the scene of one of five homicides in the county that day.

“I was looking at the moon, saying, ‘Did you have something to do with this?’ ” Martinez said. “As a cop, you can feel when something just isn’t right. You know how people get premonitions about earthquakes? Well, cops get that when it comes to crime. I’ve been doing this for 15 or 16 years, and there was definitely something in the air.”

That week, from July 3 to 9, 19 people were killed in L.A. County. Twelve is the weekly average this year, according to the county coroner’s office. The weekly high, in February, was 25. The low was seven, one week in January and one in April.

Most of the dead in the first full week of July were black or Latino men killed by gunfire. Two of the people were shot by police. Overwhelmingly, the 19 killings occurred in areas south of the 10 Freeway and east of the 405. And none of the 19 garnered the level of attention of those in Louisiana, Minnesota and Texas.

“I don’t think the public understands really what’s going on as far as all the murders that are occurring in our county,” L.A. County Sheriff’s Lt. Joe Mendoza said. “I don’t think people actually know how many people are dying until it reaches out and touches their families.”

Alfredo Esparza said his family had long worried about his older brother Gilbert Esparza, who was fatally shot in the early hours of July 9 while riding his bike on an unlit trail along the Los Angeles River in Bell.

“I feel like people don’t realize it is dangerous out there, and people can get hurt for any reason,” Alfredo Esparza said.

“Honestly, things aren’t as bad as they used to be, but when I think about the people getting murdered in Los Angeles ... 48 is a lot of people dead for just one month. Americans are so focused on terrorism, but I think we’re the terrorists, terrorizing ourselves.”

During that week in July, the county’s oldest homicide victim was 48: Sylvester Darell Barker was stabbed around dusk on July 3 as he walked from a store to the Compton home he shared with his mother. 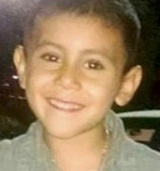 The youngest was 4-year-old Salvador Esparza III, who was on the porch of his mother’s boyfriend’s home in Altadena on July 6 when he was hit by a bullet meant for another person.

Fourteen of the 19 killings involved gunfire. Two people were stabbed to death. One was beaten, one strangled and the county coroner has not made an official cause-of-death determination on another.

Four were women. At least four were homeless. Five were black, two white and one Asian. The remaining 11 were Latino.

Two people were shot while riding bicycles. Four were shot in cars, including Margarita Rosas, a Cudahy woman who was sitting with a co-worker in the front seat of her car outside his home, and Victor Alfredo Garcia, a 23-year-old El Monte man who was shot on his way home from work in an apparent road rage incident while his younger brother was driving beside him.

The two Latinos killed by police increased the total of officer shootings to 19 for the year in L.A. County.

“We can talk all day about the dynamic of it all, but with a guy like this, he went out and forced these three officers to protect themselves because he decided he wanted his life to end,” said Cotter, whose team is investigating the Ramos shooting.

“It’s a terrible thing because I’m sure these officers didn’t go to work that day hoping to shoot someone.”

Of the 19 deaths, three cases have resulted in murder charges.

Oscar Rodriguez Jr. is accused of beating and strangling his girlfriend, Nancy Molina.

Nicholas James Bowling is accused of strangling Franklin Murrell Rogers, with whom he’d been romantically involved.

And Abdulla Tario Camran is charged in the death of Joie Nicole Kinney, whose body was found in a West Hollywood dumpster July 6.

In the other cases, suspects — when there were descriptions — were men and often the same race or ethnicity as the people who were killed. In Compton, however, witnesses said two Latino adults attacked and stabbed Barker, who was black. 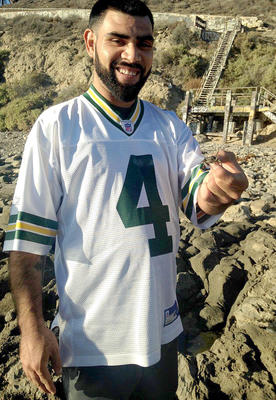 Also in Compton, Antonio Lopez, who was Latino, was shot in the back July 6 by a man witnesses described as black. Lopez, 31, was the youngest of seven siblings, a single man beloved by his 17 nieces and nephews, his sister Lourdes Lopez said. Their father lives in Mexico now, and the family met with him in Tijuana over the weekend to break the news that his youngest child had been killed.

Lourdes Lopez said she always worried about her family’s safety in Compton — she moved her children to Bellflower several years ago, where she feels safer. But her brother was shot as he was walking from the store to his friend’s apartment across the street, and investigators have no clear motive in the killing.

“It’s kind of a wake-up call,” she said. “Antonio was an innocent person, and somebody, for whatever reason, felt he had to shoot him. So, you know, it could happen to anybody. It’s just so senseless. Why do you feel like you have to kill somebody over nothing?”

Unfortunately, more families are joining our fraternity every
week; "Families of Victims of Senseless Gun Violence". Why is
KILLING the answer to ANYTHING? I encourage these families and
families yet unharmed to join our family in asking for federal
assistance with our quest for justice for our slain family members.
Our family members were victims of "Domestic Terrorism". Your
family is only 1 bullet and 1 "Domestic Terrorist" away from joining
us. America, we can do better.