Officials are offering a $50,000 reward for information on the whereabouts of a man suspected of opening fire at the Standard Hotel in downtown L.A. in December, wounding three people and killing a 21-year-old man. 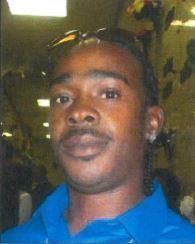 Police say they suspect 32-year-old Jamaine Harrington of being the shooter.

On Dec. 13 about 2:30 a.m., two groups of men got into a fight in front of the Standard Hotel in the 500 block of South Flower Street, and two people were shot, police said.

Police said that Harrington ran around to the back of the hotel, where he exchanged gunfire with another man, who was shot in the leg. One of the rounds fired also hit Thomas Johnson, who was taken to a hospital, where he died.

Police are still trying to determine what the fight was about. At this point, detectives have "no idea," said LAPD Det. Doug Pierce, who is investigating the killing.

Previously, police released information showing the suspect in the hotel's elevator. Harrington weighs 140 pounds and is between 5 foot 6 and 5 foot 8. He has black hair and brown eyes, and his hair is styled in cornrows.