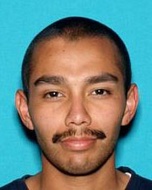 Raul Cervantes, a 24-year-old Latino, was shot and killed Saturday, July 30, on the Gage Bridge in the 5400 block of Gage Avenue in Bell, according to Los Angeles County coroner’s records.

Bell police found Cervantes lying near the bike path entrance on the western descent from the bridge after receiving a call about shots being fired at 1:41 p.m., said Los Angeles County Sheriff’s Lt. Mike Rosson.

Cervantes was pronounced dead at the scene at 1:56 p.m. with a gunshot wound to the chest, according to coroner’s records.

Rosson said video footage of the shooting shows Cervantes standing at the entrance to the bike path when a Latino adult walked up to him and opened fire. The gunman was last seen running west off the bridge on foot.

Cervantes had ties to a gang in Bell, Rosson said, and investigators believe the shooter was a member of a rival gang based in another part of Bell.

Do you have information to share about the life of Raul Cervantes ? The Homicide Report needs your help. Please fill out this form or e-mail us at homicidereport@latimes.com.

A Big THANK you to all the witness that testified what happen to my nephew Raul C. Bell police n Detectives working hard in the case .. 🙏 plz if anyone has any Info about the case call Bell police THANK You

what ever happend in this case

Video needs to be shown so someone may possibly identify the shooter. You know which way he ran you have a video and still cannot find the shooter. Either someones not doing their job or just doesnt care. We want answers and results. A family was torn apart by losing raul cervantes and we cannot just let this go. U say he was killed on the bike path yet blood is on the street. You say he was shot in the chest but document state aotherwise. Who telling the truth here? Media and detectives and coroners all have different information.

Hello plz if anyone has any information please call the Bell police department... My nephew was a father of 2 kids he was son and brother ! plz we want justice for him ! Love you Raul Cervantes 💔